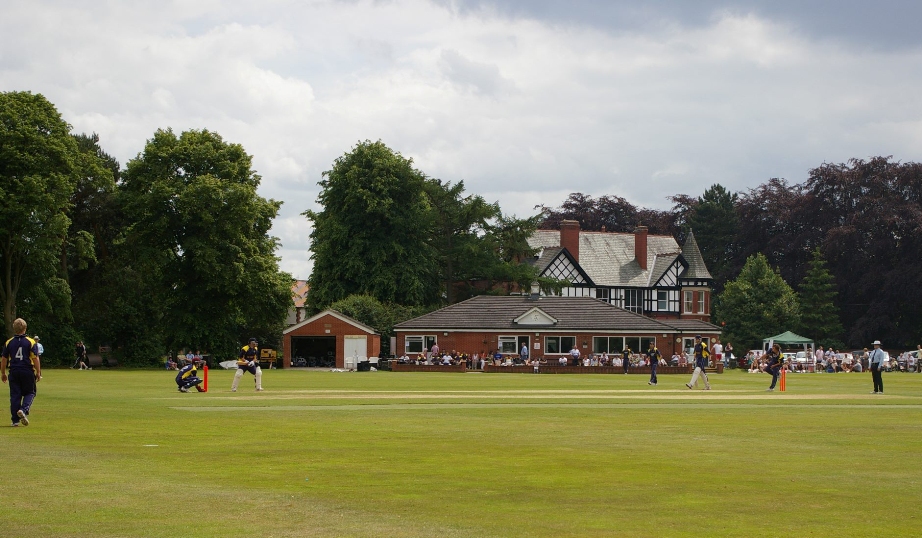 Knypersley moved within 12 points of Leek as they earned maximum points at home against Checkley, beating them by 75 runs. Openers Jonathon Cumberbatch (49) and Dan Ball (40) set a solid platform, but 93-0 soon became 110-3. Steadying the ship Nayyar Abbas (27) and Paul Goodwin (26) helped push the total up to 176-7. In reply Checkley only had captain Andy Carr that showed any resistance with 28 as his side were dismissed for 101, Kevin Cockerton (3-37) and Abbas (3-9) both taking three wickets. With two games left Knypersley have moved to within 12 points of league leaders Leek and are five points clear of third place Longton.

Leek could only manage a draw against Audley, with only 23 overs possible in the second innings. Leek batted first stuttering to 137-9 from 50 overs, Alex Mellor top scoring with 28, Atta Ur Rehman returning figures of 5-54 for the visitors. In the second innings Audley closed their innings on 109-3 from 23 overs, Thomas Birks hitting 43.

With Leek only managing a draw, Longton took the opportunity to the close the gap to 17 points, beating Burslem by 84 runs. Richard Hassall (114) hit his first century of the season as he helped his post 220-6 off 46 overs. Eddie Jones (6-67) took his best figures of the season in the second innings as Burslem were dismissed for 136, Craig Barker also returned figures of 4-44 for Longton. Burslem are 22 points behind Little Stoke and safety.

Wood Lane gained the winning draw against Porthill Park, which is a result that didn’t suit either side in the hopes of chasing the league title. Late runs for Porthill from Josh Lowndes (50no) and Ben Cotton (40) pushed their teams total up to 159-9, Adam Williams the pick of the bowlers with 3-30. Both teams were looking for victory in the second innings, Wood Lane captain Daniel Brierley hitting 72, but both sides ran out of overs Wood Lane closed their innings on 155-9 off 50 overs finishing five runs short of victory and Porthill needing one wicket. Wood Lane are now 34 points behind Leek and Porthill another four points behind.

Moving to the bottom of the division, Cheadle kept their slim hopes of survival alive, when they beat Stone by four wickets, successfully chasing down 144. James Dawson hit 60 as his Stone side were all out for 144, Cheadle captain Simon Plant (4-10) and James Sellers (4-46) both taking four wickets. In reply Shaun Jenkinson top scored with 35, but it was Dave Wheeldon who saw his side over the line unbeaten on 30. Cheadle are now 41 points behind Little Stoke with two games remaining and 19 points behind Burslem.

Little Stoke only managed a draw against Hem Heath, as they had to close their innings 12 runs short of the target required. They had bowled Hem Heath out for 112 from 48 overs, Daniel Colclough and Hassan Raza both taking four wickets. Little Stoke in reply were on 100-7 from 28 overs, finishing 12 runs short of a victory that would have pushed them closer to securing safety.

Elworth clinched the division one title at Moddershall, beating them by three wickets successfully chasing down 133. Chris Plant (40) top scored for the home side as they were dismissed for 133, Steve Morgam retuned figures of 4-41. In reply Elworth made a poor start losing both openers for only 11, but the middle order fired and Yasir Ali (21no) saw his side over the line to secure the title. At the other end of the table Moddershall are one place above the relegation zone and level on 182 points with Leycett who sit in the drop zone.

Whitmore stayed in the box seat to follow Elworth into the premier division, beating Norton by 89 runs. Raj Kumar (42) top scored for Whitmore as they were restricted to 148, Ian Reynolds taking 5-32. Lee Johnson then claimed figures of 6-27 as Norton collapsed to 59 all out. Whitmore are now 19 points clear of third place Sandyford, while Norton are falling quickly towards the bottom two, without a win in the last four games, are now only two points clear of Leycett.

Sandyford kept the pressure on Whitmore picking up maximum points against Leycett. Jonathon Barnett hit 81 not out as his side Sandyford side posted 178-6 from 51 overs. Andrew Barnett (5-40) and Sohail Rauf (4-26) dismantled the Leycett batting line up as they were all out for 77. Leycett sit in the drop zone but are within five points of the three sides above them.

Barlaston are the other side fighting off relegation and they survived a close game and came away with a tie against Silverdale. It took Abdur Rauf Khan to hit 44 to get Barlaston to a fighting total of 86, as Mitchell Stokes returned figures of 6-45 for Silverdale. In reply even though Silverdale lost wickets at regular intervals it looked as though they would ease to victory needing one to win with two wickets in hand, but Kahn (7-41) and Michael Dyer took a wicket a piece for Barlaston without a run being added and Silverdale failed to get over the line. Barlaston are now five points clear of Leycett, while Silverdale saw their chances of promotion disappear with a tie.

Meakin still have an outside chance of promotion, beating relegated Betley by eight wickets. Tom Forster (67no) and Yasser Tariq (53) helped Betley post 164-6 from their 55 overs, but it proved not to be enough as Ranesh Perera (69no) and Qasim Sheikh (61no) saw their side over the line in the 25th over. Meakin now are 44 points behind Whitmore.

Meir Heath gained the winning draw on their travels as Blythe hung on. Meir Heath were dismissed for 140, but they managed to reduce Blythe to 125-9, Blythe’s Asif Hussain top scoring in the match with 53.

Ashcombe Park stayed the favourites to grab the last place to go up behind Newcastle & Hartshill with victory over Weston. Nick Goodwin hit 74 for Ashcombe as his side were dismissed for 162, Phillip Stockton and Gary Jennison both claiming four wickets. In the second innings Dave Goodwin was the pick of the bowlers taking 4-18, as Weston were reduced to 79 all out. Ashcombe are now nine points clear of third place Alsager, while Weston should be safe 21 points clear of the drop zone.

Alsager maintained the pressure on Aschombe as they picked up maximum points against promoted Newcastle & Hartshill. Alsager got off to a poor start with the bat and were reduced to 23-2, but Sean Price rebuilt the innings with 57, but they still needed late runs from Paul Adams (59) to reach 170, Muhammad Fayaz took 6-52. The home side also got a poor start with the bat and fell to 39-4 and then 74-8, but runs from number nine Andrew Keates (62), kept Newcastle & Hartshill in the game but they were eventually dismissed for 158.

Caverswall kept their slim hopes of promotion alive beating strugglers Rode Park & Lawton by 43 runs. Jeandre Luddick (80) and Mike Dodd (56) were the only batsmen to make double figures for Caverswall as they declared on 178-8. In the second innings Tom East returned figures of 5-51 for away side as Rode Park were dismissed for 135. Caverswall are now 26 points behind of Ashcombe and Rode Park sit at the bottom of the table are 19 points adrift of Eccleshall and safety.

Eccleshall had a miserable day as they were manhandled by Stafford in their effort to avoid relegation. Aparajit Singh Khurana (6-5) and Kashif Hussein 4-13 dismantled the Eccleshall batting line, as they were dismissed for 25. Stafford then knocked off the total for the loss of one wicket in the seventh over. Eccleshall are just two points above Woore and the relegation zone.

Woore gained the winning draw away at fellow strugglers Oulton. The away side were put into bat and Muhammad Arshad was the major run scorer for Woore with 87 as they set the Oulton 198 to win. In reply Tom Spruce top scored with 42 as Oulton closed their innings on 171-8. Woore are seven points behind their opponents and two adrift of Eccleshall.

Bignall End failed to pull away from the sides at the bottom when they were unable to defend 187 at home against Kidsgrove. The home side needed late runs from Ben Massey (73) to reach 187-8 from 55 overs, Richie Jervis returned figures of 6-74. Kidsgrove then knocked the total off with five wickets in hand, Richard Hagan (52no) and Tom Lench (20no) seeing their side over the line. Bignall End are just 13 points ahead of Woore and Kidsgrove moved to 22 points clear.

Bagnall took a step closer to securing promotion, while all but ending Oakamoor’s hopes with a seven wicket victory. Muhammad Ayub hit 75 as his side were all out for 137, Asif Raza taking his hundredth wicket of the season with figures of 7-53. Raza then smashed 40 not out as he and captain Simon Gordon (26no) saw their side over the finishing line. Bagnall are 10 points clear of second place Endon and 37 points ahead of Crewe in third.

Endon moved five points closer to Bagnall as they picked up maximum points against Stone SP. Endon’s Jordan Weaver smashed 61 off 42 balls, while captain Alex Bailey hit 59 as their side were eventually all out for 232, Matt Stupples was the pick of the bowlers with 5-48. In the second innings Anthony Sheeron took 4-71 as Stone were dismissed for 180, Johnathon Mccredie hitting an unbeaten 56.

Crewe leap-frog Wedgewood & Stanfields into third, beating them at home by 71 runs. The home side had set Wedgewood 107 to win, but Shahid Mahoob destroyed the Wedgewood batting line up taking 7-13 as George Hardings claimed 3-19 and the away side were all out for 35. Crewe are 17 points behind second place Endon, but are now three points ahead of Wedgewood, who have now lost their last three games against teams around them, as they challenge for promotion.

Moddershall A suffered a major blow at home to their hopes of survival, beaten by nine wickets by Hanford. The away side’s captain Mike Coxon returned figures of 7-21 for his side as Moddershall collapsed to 59 all out. Roger Davis (27no) and Mitchell Edwards (10no) saw their side over the line. Moddershall are 25 points adrift of Fenton and safety.

Fenton were beaten by 38 runs against Forsbrook, as they were unable to chase down 142. Ben Warrender (60) was the mainstay of the Forsbrook innings, before they were dismissed in the 53rd over, Eddie Plant the pick of the bowlers with 5-41. Fenton’s innings never got going and they were all out in the 38th over for 104.

Norton-In-Hales came out easy victors as they travelled to Chruch Eaton dismissing the home side for 59. Mathew Riley did the damage for Norton-In-Hales as he took 7-25 to dismiss Church Eaton. James Ruscoe then smashed 35 not out as his side chased down the target in the 17th over.