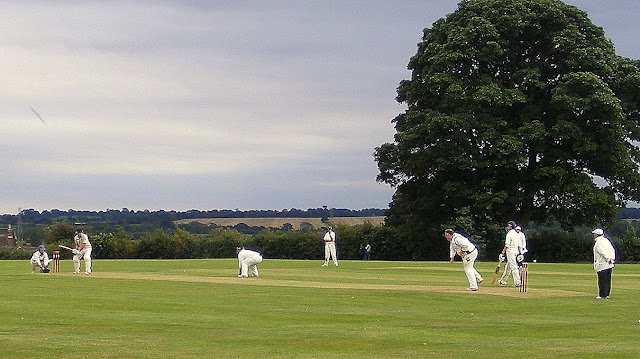 Stone are the early leaders after an eight wicket home victory against Checkley. The away side were restricted 137-8, Josh Cartledge top scoring with 62, Dries Nell and Russell Ballard both taking three wickets for Stone. In reply the home side made a solid start with an opening stand of 83 between Luke Cheadle (48) and James Dawson (52), eventually knocking off the runs two down in the 38th over, Phillip Cheadle and Richard Harvey in at the end.

John Hancock set the tone as his Porthill side sit in second place after a winning draw against Leek. Hancock dominated the batting before he was finally out on 123, the innings drawing to a close on 229-7; Leek captain Greg Willott collected figures of 4-79. In the second innings Leek looked in a solid position at 142-3 but the innings fell away with Chris Beach (73) trying to keep it in tact. Dan Hancock did the damage at the end of the innings picking up 4-23, as Leek finished on 188-8.

Knypersley got their first win of the season with an eight wicket victory against Whitmore. Robert James (4-34) and Nayyar Abbas (3-28) were the main threat as Whitmore were dismissed for 130. Daniel Ball (73no) then carried his bat and saw his side over the line with Abbas (29no) after 37 overs.

Burslem also picked up their first victory, with a comfortable six wicket home win against Hem Heath. The away side got off to a terrible start losing Lee Ridgway to the first ball off the game and Jack Wood soon followed with just a run on the board. Hem Heath recovered to 104 all out in the 42nd over, Muhammad Zeeshan returning figures of 5-41. Burslem knocked the runs off in the 35th over, Kevin Mountford top scoring with 41.

Elworth and Audley are both still looking for that elusive win after they played out a draw. Elworth batted first and posted 180-8, opener Peter Barnett top scored with 47, Andrew Johnson and Thomas Oaks picked up three wickets each for Audley. In reply Audley got off to a slow start at 61-4 but they recovered to 155-5 from 45 overs, Mustafa Bashir finishing on 50 not out, but it wasn’t enough to take the winning draw.

Longton earned the winning draw as they travelled to Wood Lane. The away side were put into bat and with most batsmen making starts they set Wood Lane 192 to win. The home side got off to a poor start with the bat and never really recovered as they closed the innings on 126-8.

Cheadle are one of three sides on 45 points at the top with a 79 run victory against local rivals Blythe. Captain Shaun Jenkinson set the tone with the bat hitting 78 as his side posted 196-9. James Sellers then tore through the Blythe top order and then took the last wicket on his way to collecting figures of 5-23 as Blythe were dismissed for 117.

Little Stoke are alongside Cheadle after securing a 68 run win against Betley. Naveed Arif (101no) and Peter Turnbull (72) scored the majority of the runs as their Little Stoke side declared on 234-5 from 50 overs.  In reply Betley got off to a terrible start at 13-3 and were eventually all out for 166, James Ecclestone and Turnbull both taking four wickets.

Meakin complete the trio after they were able to chase down 136 against Sandyford with two wickets remaining. Matthew Redican was the star with the ball for Meakin taking 7-30 from 15.2 overs as the home side were dismissed in 55th over. Meakin themselves got off to a shocking start at 29-4, but Richard Hassall (57) and Andrew Whitehead (36) led the recovery, and they reached the total eight down.

Ashcombe gained the winning draw at home against Alsager. The home side batted first and with runs throughout the batting line up, they were all out for 230, David Proffitt top scoring with 81 whilst being well supported by Steve Proffitt (53). Alsager never looked like troubling the Ashcombe score and their innings fizzled out to 148-7.

Meir Heath travelled to Barlaston and came away with the winning draw. Dale Heath (88) top scored for the away side as they declared on 239-5. In reply Bronson Meehan carried his bat through the 47 overs for 56 not out, as they closed their innings on 131.

Fraser Hawkins and Khalid Malik put Moddershall on the front foot as they gained the winning draw against Silverdale. Malik smashed 90, while Hawkins opened the batting for 76 as Moddershall posted 243-7. Silverdale set about chasing the total down, Mick Moore leading the way with 91 not out, but they finished just short at 215-5.

Leycett top the table after a three wicket victory against Weston. Weston won the toss and decided to bat and were restricted to 179, with Chris Simpson leading the way at the top of the innings with 80; Tom Lawton being the pick of the bowlers for Leycett with figures of 5-64. In reply Leycett got off to a strong start at 87-0, but lost both openers in quick succession, resulting in them having to scrap for the victory. Craig Barcroft saw them over the line after 56 overs finishing on 38 not out.

Newcastle & Hartshill are level with Leycett , as they successfully chased down 173 at Bignall End with seven wickets remaining. Adrian Myatt (79no) ensured the home side set a reasonable target after they got off to a poor start at 26-3, but Newcastle & Hartshill made light work of the run chase. Andy Wood (60) and Nasir Malik (55no) were the mainstays of the innings as it took the away side just 37 overs to reach the target.

Bagnall (like Weston and Bignall End) have lost the two opening fixtures after a three wicket defeat against Rode Park & Lawton. Bagnall batted first and were dismissed inside 33 overs overs for 95, Ian Harding was the pick of the bowlers with 4-8. In the second innings Mathew Brazier (5-42) gave his side a chance of gaining the elusive win as Rode Park lost wickets at regular intervals but made it over the line with three wickets in hand.

Robert King smashed 104 not out as his Caverswall side saw off the challenge of newly promoted Endon by 51 runs. King’s undefeated knock came off 87 balls as the home side declared on 251-6. In the second innings King collected figures of 3-6 as Endon were dismissed for 200, Gareth Rigby top scoring with 63.

Kidsgrove came away from Oulton with 25 points after securing a 119 run victory. Dave Leese hit 95 as the away side declared on 259-5. In reply Oulton never looked like troubling the target and were eventually all out for 140 in the 57th over, Tom Lench taking 4-14.

Stafford picked up the winning draw at home against Norton. The home side posted 226-8, Aparajit Singh Khurana top scoring with 74. In response Norton closed their innings on 154-6 from 57 overs.

Zafar Iqbal ensured Hanford top the table with an outstanding performance as his side beat Crewe by 82 runs. Iqbal came to the crease with his side on 151-4 and smashed 79 off 39 balls, Jordan Stanway (94) played a key role in setting the platform for the innings as they posted 251-6. With the ball Iqbal claimed figures of 7-70 from 17 overs as Hanford dismissed Crewe for 169, Phillip Marsh hit 76 off 48 balls in vain.

Stone SP lost their second game in a row in a heavy seven wicket defeat at second place Forsbrook. The home side won the toss and put Stone in to bat; and it paid off  as they restricted them to 61, Muhammad Rahim was the pick of the bowlers with 4-11. Forsbrook then eased to the target after 17 overs.

Eccleshall eased to an eight wicket victory away at Oakamoor. The home side were put into bat and they stumbled to 118 all out, Phil Tomzcak the only light for Oakamoor with 45. In reply Eccleshall looked in little trouble, Nathan Hinton (41no) and captain Myles Coughlan (14no) saw their side over the line.

Fenton also won comfortably against Norton-In-Hales with a nine wicket victory. Stephen Atkinson (5-23) and Ashley Kent (4-23) were the only bowlers used by Fenton and as the away side were dismissed for 49. Fenton with little risks passed the target after 20 overs for the loss of week.

Church Eaton gained the winning draw as they travelled to Wedgewood. The away side batted first posting 199-8, Matt White top scoring with 61, while Ramzan Mohammed took 5-52 for Wedgewood. In response Wedgewood closed their innings on 162-9, Robert Hogarth the pick of the bowlers for Church Eaton with 5-63.

Woore also gained a winning draw against Leek & Moorlands. Navid-Ul-Khurrram Kaleem hit 105 not out, when his Woore side declared on 211-1 from 43 overs. Benjamin Lucas (57no) and Andrew Burton (47) supported Kaleem. In the second innings Woore got plenty of overs to bowl at Leek but were unable to pick the final two wickets  as they closed on 180-8 from 63 overs.