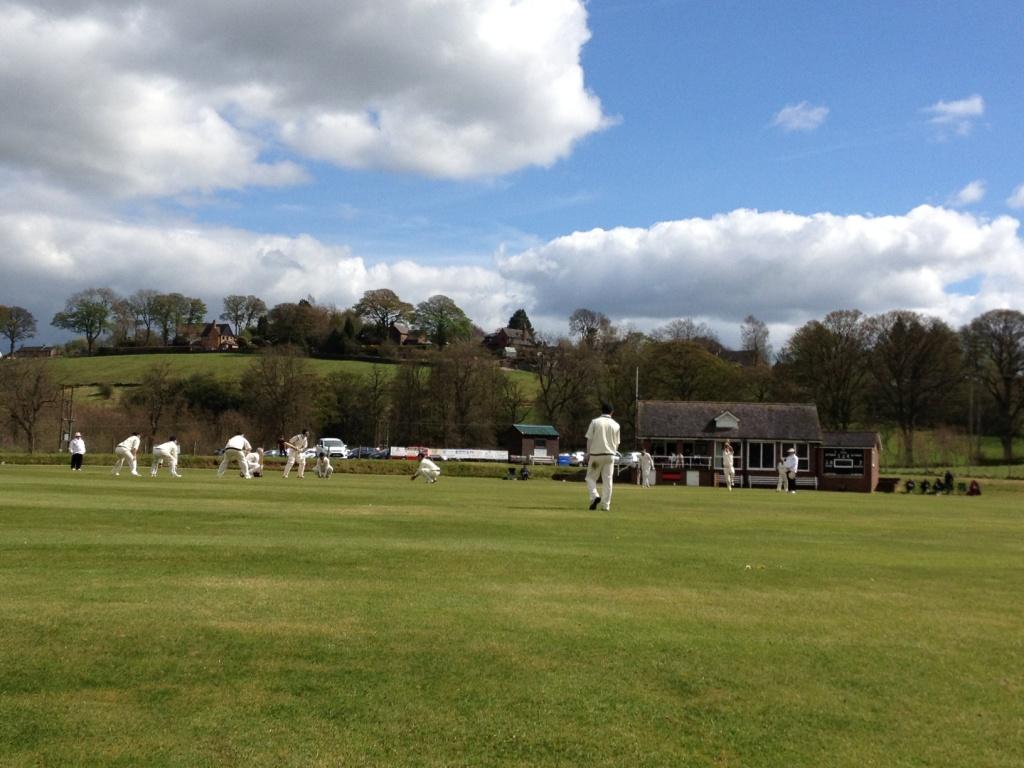 Longton jumped into second place, collecting 25 points at home against Elworth, with a 52 run victory. Richard Holloway (49) and Tom Redfern (39no) were the only batsmen for Longton to get to grips with the Elworth bowling attack as they set the visitors 149 to win. Craig Barker (5-39) and Chris Hampshire (4-37) did the damage with the ball for Longton as they restricted Elworth to 96. Elworth one of five teams without a win this season.

Porthill experienced defeat for the first time this season with a three wicket loss against third place Burslem. Ben Cotton (52no) top scored for Porthill as they were restricted to 178-9. In reply Burslem got off to a poor start, but Kevin Mountford (54) was one of four players to go over 30 as they chased down the total in the 52nd over.

Leek got back to winning ways with a comfortable eight wicket victory against at Wood Lane. After restricting the home side to 162, Alex Mellor came out and dominated the Wood Lane bowling attack. Mellor hit 96 not out off 99 balls, while he was supported by others making starts, enabling Leek to reach the target in the 37th over.

Audley remain winless, after an eight wicket defeat against Checkley. Dean Bedson (70), Ian Wilshaw (50) and Robert Hemmings (48no) were the only three batsmen to get to grips with the Checkley attack as they amassed 195-9.  In reply Nick Hunt (67no) and Josh Cartledge (64) did the damage for Checkley as they passed the finish line in the 48th over.

Justin Mould’s century wasn’t enough to force a victory for Whitmore against Hem Heath. Mould finished on 113 off 154 balls at the top of the order, finding support further down the batting line up as Whitmore posted 226-6. In the second innings the chase was never on at 26-2 for Hem Heath and they closed their innings on 118-4.

Peter Turnbull’s century set up an 83 run victory against Ashcombe Park. After a solid start Turnbull came to the crease with the score on 84-1 and smashed 104 not out off 75 balls as his Little Stoke side declared on 241-3 from 49 overs. Turnbull then claimed figures of 3-22,well supported by Daniel Richardson taking 3-33 dismissing Ashcombe for 158.

Cheadle lost ground on Little Stoke, only managing a high scoring winning draw at home against Barlaston. The Tean Road side made a tremendous start, openers Shaun Jenkinson (112) and Darren Plant (100no) setting the momentum for the game as Cheadle declared on 231-1. Barlaston had runs throughout the innings, Chris Plant top scored with 55 as they closed on 215-8 from 62 overs.

Meakin are in the same scenario as Cheadle as they too could only manage a winning draw against Blythe. Peter Wilshaw top scored with 87, while Ben Mcquire smashed 66 off 31 balls in an innings that featured seven sixes as Meakin declared on 296-8. In reply Blythe got off to a poor start falling to 16-3, but Asif Hussain hit 131 finding support in the lower order to save his side from defeat as they closed on 280-7.

Moddershall collected their first win of the season in a low scoring 43 run victory against Alsager. Robert Bagnall’s 40 and Sam Moor’s 35 were the main contributes to Moddershall’s score of 126 all out. In the second innings both Kashif Khatti and Matt Goodwin picked up five wicket hauls as Alsager slumped to 83.

Meir Heath ran out comfortable winners against Betley with a 90 run victory. Richard Stonier hit 101 as his Meir Heath side declared on 200-5. Iftikhar Asghar then collected figures of 5-14 as Meir Heath dismissed Betley for 110 in the 51st over.

Silverdale gained their first win, against Sandyford who still seek theirs, the former  victorious by three wickets. Sandyford stuttered to 181-5, Nick Atkinson top scoring with 66, with Stephan Shemitt hitting 54. In reply Gavin Barker (52) and Stephen Jones (50) both hit half centuries as Silverdale chased down the target in the 57th over.

Newcastle & Hartshill sit top of the division after a five wicket victory against Caverswall. Andrew Keates collected figures of 4-42 as Caverswall were dismissed for 158 after a dreadful start with the score on 2-3. Newcastle & Hartshill captain then saw his side over line with a match winning knock of 63 not out.

Kidsgrove find themselves in second place after an easy 95 run home win against Bagnall. The home side declared on 217-5, Dave Leese (73) and Sohail Zaroof (61) were the main run scorers. Richie Jervis and Zaroof then took three wickets each as the visitors were dismissed for 122.

Ben East tore apart the Leycett batting line up as his Rode Park & Lawton side gained an eight wicket victory. East put in possibly the performance of the day with the ball, picking up figurers of 8-17 from 10.1 overs, which included a hat trick as Leycett were blown away for 41. In reply Rode Park & Lawton lost two early wickets, but there was no trouble in reaching the finish line in the 11th over.

Oulton beat Norton by five wickets after Simon Barker collected figures of 6-62. Barker did most of the damage in the Norton middle order as they went from 45-3 to 69-7 as they were dismissed for 118. Oulton then knocked off the runs in the 25th over, Barker seeing them over the line with 31 not out.

Endon lost their second game of the season, as they were unable to defend 182 against Stafford, going down by eight wickets. Batting first Endon had plenty of starts throughout the innings but no one could go on as they were all out in the 55th over. In the second innings Richard Brazier smashed 75 not out off 39 balls, which included seven sixes. Dave Foster also hit 59 not out, while Guy Seaten was dismissed for 41, Stafford reached the target after just 26.1 overs.

Weston collected 20 points beating Bignall End at home by three wickets. The visitors managed to post 145-9 from their 55 overs. Weston kept losing wickets at regular intervals in reply but they managed to get over the line after 46 overs.

Eccleshall carried on their winning ways with a 146 run victory against Church Eaton. Tom Hibbert (72) and Myles Coughlan (81) weighed in with big runs as Eccleshall declared on 250-5 after 48 overs. In the second innings Nathan Hinton added to his earlier 47 with figures of 5-14 as Church Eaton were dismissed for 104.

Forsbrook keep the pace with Eccleshall as they beat Oakamoor by five wickets. Oakamoor batted first and needed late runs from Matt Wolff (30) and Chris Price (28) to reach 171. Sean Bowers and Andrew Jones both took four wickets as Tom Sherratt top scored with 34. In reply Forsbrook had runs throughout the innings and chased down the target within 47 overs.

Woore collected 20 points as they travelled to Hanford winning by eight wickets. Hanford’s Andrew Pickerill hit 75 at the top of the order as his side were dismissed for 149, Benjamin Lucas and Taz Hussain both picking up five wicket hauls. Lucas then hit 53 not out with the bat, after Navid-Ul-Khurram Kaleem was out for 49 as Woore made it to the total in 33 overs.

Crewe travelled to Norton-In-Hales and came away with the 25 points with a 51 run victory. Batting first, the away side lost wickets at regular intervals on their way to setting Norton-In-Hales 117 to win. In the second innings George Hardings took figurers of 6-16 for Crewe as the home side were bowled out in the 50th over for just 65.

Leek Moorlands are still winless as they were beaten by two wickets against Wedgewood. Leek needed late runs from Mick Coxon (67no) as they posted 173, Ramzan Mohammed collected figurers of 5-51. In the second innings Coxon took 3-53 with the ball, but it wasn’t enough as Josh Clayton struck 71 for Wedgewood.

Stone SP beat Fenton by 54 runs. Stephen Atkinson took figurers of 5-59 for Fenton as Stone posted 183-9, Ashley Lunn (54) and Shafique Hussain (52no) passing the half century mark. In reply Paul Farmer (59) passed 50 himself but it wasn’t enough as Wasim Khan took 4-52 as Fenton were bowled out for 129.