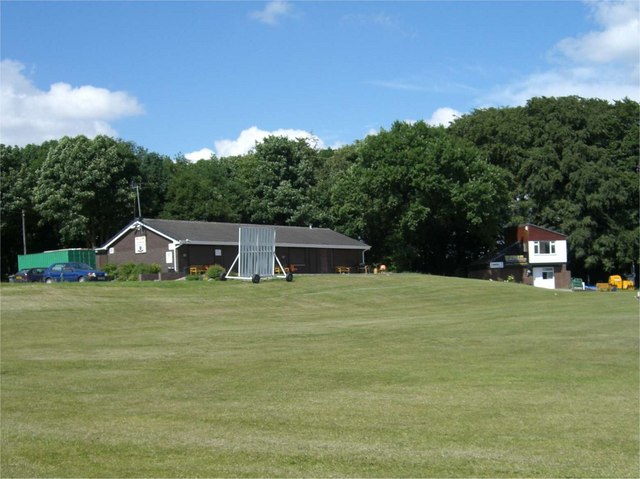 Knypersley move to the top of the table after picking up maximum points, beating Porthill Park by 135 runs. Jake Thompson led the way with the bat making 90 for the league leaders, finding support in Paul Goodwin (51no) as his side posted 226-5. In the second innings Nayyar Abbass collected figures of 4-13, as Porthill were blown away for 91. Knypersley now sit 13 points clear of Checkley and Longton.
Longton drop to third, losing at home by four wickets against Hem Heath. The home side stuttered to 139-8 from their 55 overs, opener Michael Longmore top scoring with 50, as the wickets were shared around. In reply Hem Heath got off to a poor start with the bat, falling to 22-3 – which then became 67-6, but Bilawal Bhatti came in at number seven and made an unbeaten 63 to see his side over the line in the 50th over.
Checkley jump into second place with a winning draw against strugglers Wood Lane. Kurtis Lally and Daniel Spasic both made fifties for Checkley as they set the home side 191 to win. In response Wood Lane collapsed from 104-4 to 113-9, but managed to close their innings on 126-9. The draw leaves Wood Lane 10 points clear of the drop zone.
At the other end of the table Elworth failed to get to grips with the Leek bowling attack, losing by seven wickets. Elworth were put into bat and were dismissed after 43.3 overs for just 77, Greg Willott (5-21) and Alex Thompson (4-33) doing the damage with the ball. Alex Mellor (36) top scored for Leek in the run chase, easing past the total in the 28th over. The defeat leaves Elworth 24 points behind Wood Lane and safety.
Whitmore find themselves in the bottom two after a two wicket defeat against Stone. David Womble took 6-52 for Stone, reducing the home side to 168 all out. Stone then had starts at the top of the order with the bat, but a collapse saw them fall from 156-5 to 158-8, but Matthew Coxon hit a run a ball 38 not out to guide his side to victory.
Burslem beat Audley by 48 runs, successfully defending 198 at home. Burslem captain Christopher Lowndes led by example with the bat, top scoring with 73, as his side were dismissed in the 54th over, Thomas Oaks and Matthew Hammersley both taking three wickets for Audley. The away side then only had Dean Bedson (58) get to grips with the Burlsem attack, being bowled out after 49.3 overs.

Top of the table Meakin looked to get back to winning ways, but couldn’t find the final wicket in a dominate performance against Barlaston. Meakin had runs throughout the innings, setting the home side 219 to win, Tom Taylor and Alex Thorley collecting three wickets each for Barlaston. In reply Barlaston fell to 14-3 and then lost wickets at regular intervals as they fought to save the draw, closing their innings on 171-9. The winning draw leaves Meakin now only four points clear at the top.
Moddershall took full advantage of Meakin second slip up in as many weeks, collecting maximum points against Ashcombe, winning by 74 runs. Matt Goodwin (41) top scored for Moddershall, as they were dismissed for 192 in an innings that had runs throughout. Goodwin along with Kashif Bhatti picked up five wicket hauls in the second innings as Ashcombe were removed for 118 after 36 overs. Moddershall are now four points behind Meakin and two points clear of Little Stoke.
Little Stoke moved down into third even though they beat Blythe by six wickets. Gareth Morris was the pick of the bowlers for Little Stoke taking 6-49 as Blythe were restricted to 168-9, Craig Grimley top scoring with 55. Little Stoke then knocked off the total in the 36th over, Richard Adams leading the way at the top with 58 before being run out.
Cheadle’s hopes of promotion took another knock, after losing at home by five wickets against Silverdale. The Tean Road side got off to a poor start with the bat falling to 40-5 and they never managed to recover, being dismissed for 114 as Scott Degg took 4-19 for Silverdale. Mick Moore then saw his Silverdale side over the line with 46 not out finding support in Gareth Lello (22no).
Sandyford moved away from the bottom two with a 117 run victory against Betley. Sandyford set the home side 211 to win, with Andrew Barnett top scoring with 57. Betley then collapsed to 93 all out, as Barnett, Sohail Rauf and Daniel Roberts all took three wickets for Sandyford.
Meir Heath picked up the winning draw against fellow strugglers Alsager. Meir Heath posted 171-6, with runs throughout the innings. In reply Alsager had a solid start with an opening stand of 71, as Oliver Sadler hit 65, but as wickets started to tumble, they closed their innings on 150-8. The draw leaves Meir Heath five points clear of Alsager and the drop zone.

Newcastle & Hartshill slipped off top spot with only their second defeat of the season, coming in as many weeks, with a five wicket loss against Norton. Simon Wood made 96 as his Newcastle & Hartshill side declared on 222-7. In reply Norton had starts through the order, but it was Ahsan Tariq (42no) and Joshua Graham (40no) who saw their side over the line in the 51st over. Newcastle & Hartshill now sit in second place, six points behind Kidsgrove.
Kidsgrove took full advantage of Newcastle & Hartshill slip up, beating Weston by four wickets. Richie Jervis was the pick of the bowlers with 4-27 for Kidsgrove as Weston collapsed to 103 all out. In response the league leaders lost wickets at regular intervals, but knocked off the total after 33 overs.
Caverswall closed the gap on the top two with a two wicket home victory against Bagnall. Nazakat Ali took 4-29 for Caverwall, as the away side were reduced to 146 all out from the last ball of the innings. Robert King then put Caverswall in the driving seat with 64 off 40 balls, and they made it over the line after 29 overs. Caverswall are five points adrift of the top two after the victory.
Stafford were unable to chase down 134 against Oulton, and missed the opportunity to close the gap at the top. Oulton batted first and stuttered their way to 134, while Aparajit Singh Khurana took 6-34, to put his Stafford side in the box seat. In the second innings the Stafford top order couldn’t make the most of the starts they had, and it fell away as they were dismissed for 118, Dan Colclough and Simon Baker both took four wickets. Defeat leaves Stafford 16 points behind the promotion places.
Endon put some distance between them and the drop zone with a four wicket victory away at Leycett. Daniel Bailey took 5-20 for Endon as the home side were blown away for 89. Captain Alex Bailey (45) then top scored with the bat, as Endon reached the total in the 22nd over with the loss of six wickets.
Rode Park & Lawton comfortably beat Bignall End by 83 runs away from home. After being put into bat the away side posted 188-9, Jonathon Gallimore top scoring with (69). Bignall End then fell for just 105 in the second innings, as Ian Harding took 4-29.

Top of the table Eccleshall took advantage of their home fixture to beat bottom placed Norton-In-Hales by nine wickets. The away side were restricted to just 123, as Jack Boulton took 4-35 for Eccleshall. In reply, Eccleshall lost Tom Hibbert with only one run on the board, but Norton-In-Hales didn’t make any more breakthroughs, as Nathan Hinton (72no) and David Hibbert (50no) saw their side over the line after 22 overs. Eccleshall now sit 31 points clear at the top, while Norton-In-Hales are 20 points adrift of Leek & Moorlands and safety.
Crewe leap frog Woore into second place, victorious by five runs. Crewe made just 109, with the wickets shared around the Woore attack. It was then time for Crewe’s usual two suspects to take the wickets, George Harding taking 6-49 and Shahid Mahboob collecting 4-42. Both teams are now on 156 points, 31 behind Eccleshall.
Hanford couldn’t close the gap on the top three, losing to Stone SP by five wickets. Away from home Hanford could only muster 77, and it took Stone SP just 23 overs to knock off the total. The defeat leaves them 13 points below the promotion places.
At the other end of the table Oakamoor picked up a crucial four wicket victory over Leek & Moorlands, to put some distance between themselves and the drop. Batting first Leek got off to a solid start, Will Leeson (42) and Simon Tweets (48) put on 90 for the first wicket, but Oakamoor then picked up wickets at regular intervals to reduce the visitors to 206 all out. In reply Oakamoor were reduced to 144-6 but Gary Wright (42no) and Jack Hassall (31no) guided their side over the line. The victory lifts Oakamoor to 45 points clear of the drop but leaves Leek just 20 clear.
Church Eaton dropped below Oakamoor with a one run away defeat against Forsbrook. The home side set Church Eaton 183 to win, and Stephen Pugh (5-18) ensured they fell just two runs short, as they were reduced to 181 all out, despite Jonathon Arnold hitting 65.
Wedgewood & Stanfields beat Fenton by three wickets. Benjamin Myatt was the pick of the bowlers for Wedgewood with figures of 5-43 as Fenton were all out for 147. Adrian Lello Jnr was then the backbone for Wedgewood with the bat, hitting 45 not out from 182 balls, as they made it over the line in the 58th over.