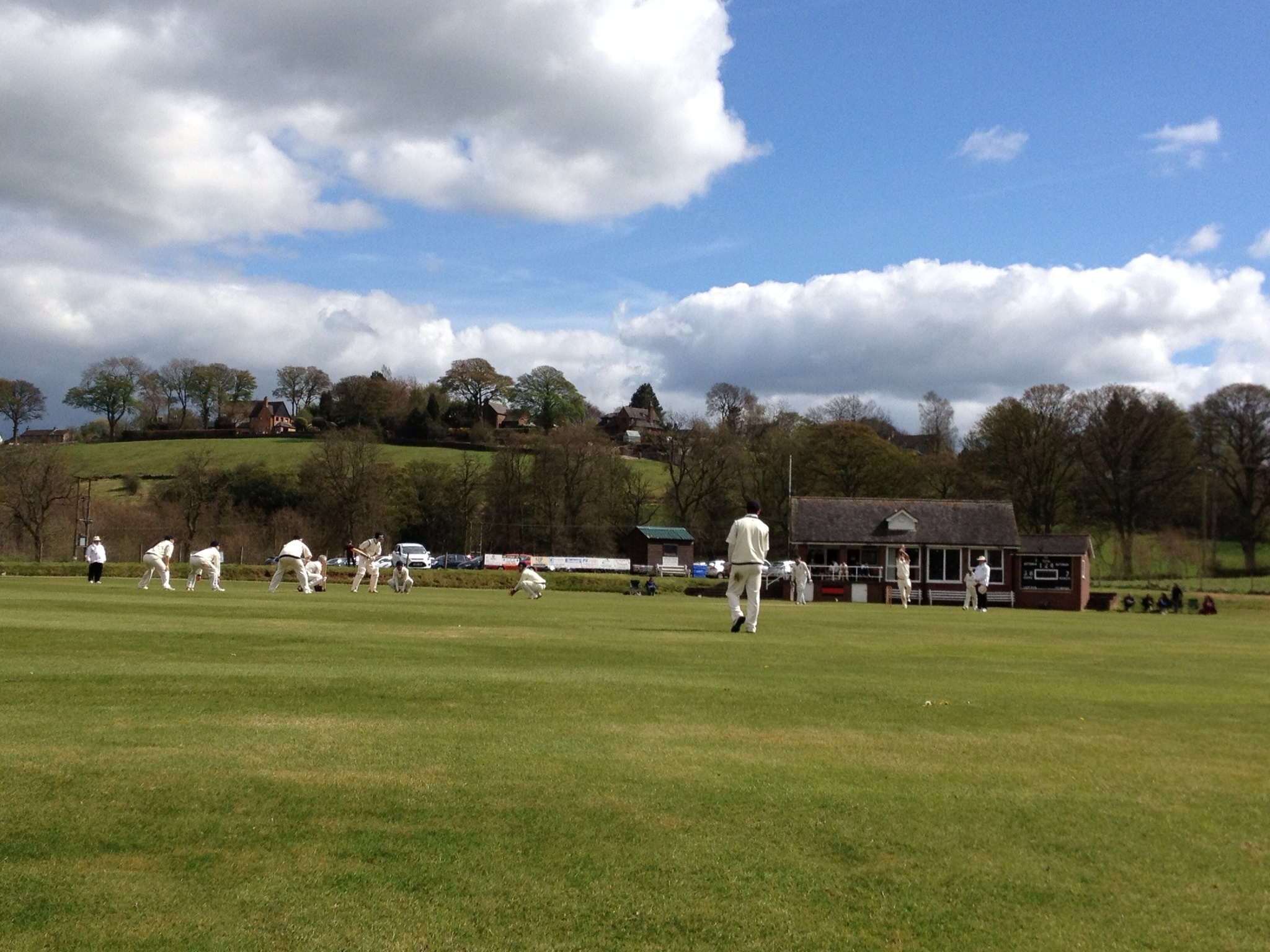 Last week’s top three were all beaten this weekend, but Checkley remain top of the league. The league leaders lost by five wickets against Stone, unable to defend 179. After winning the toss and electing to bat, Daniel Spasic (57) top scored for Checkley as they were restricted to 179-9, with Dries Nell taking 5-41 for Stone. In reply Stone were reduced to 17-2, but Matt Coxon (72) and Richard Harvey (44), steadied the innings, with Stone reaching the total after 49 overs. The victory puts Stone 24 points behind Checkley, whose lead over Knypersley increases to eight points.

Knypersley experienced defeat against Whitmore, losing by six wickets. Batting first Knypersley were dismissed for 163, with Jake Thompson (43) top scoring, while Yasim Murtaza (5-53) and Raj Kumar (4-35) doing the damage for Whitmore. In response Whitmore opener Tom Meredith set a solid platform with 63, as Kumar (34no) saw his side over the line in the 48th over, who are now 23 points clear of Wood Lane and the drop zone.

Leek drop to fifth, beaten at Porthill by 84 runs. John Hancock (80) and Dan Hancock (70no) helped the home side post 267-6 from their 55 overs. In the second innings Leek were dismissed inside 44 overs for 183, Chris Beech top scoring with 72, as Rao Iftikar Anjum took 5-49 for Porthill. Leek now sit 16 points adrift of Checkley while Porthill close the gap between themselves and the top to 12.

Longton jump into third with a seven wicket victory against strugglers Wood Lane. Having been put into bat Wood Lane’s Jamie Jervis finished on 99 not out, as his side closed their innings on 226-4, with captain Daniel Brierley also hitting 75. In reply Longton reached the target in the 54th over, with Michael Longmore hitting 72 and Dave Wheeldon, David Fairbanks and Craig Barker all making it into the forties. The win moves Longton to within 10 points of Knypersley, while Wood Lane sit six points behind Audley and safety.

The game at the bottom of the table between Elworth and Audley ended in a tie with both teams being dismissed on 171. Audley won the toss and elected to bat and were reduced to 171 all out after 53 overs with Hamza Siddique (73) top scoring, while Yasir Ali was the pick of the bowlers with 4-51. In response Elworth got off to the worst possible start being reduced to 0-2, but they recovered to 171-7 due to Ali’s 63.They then lost three quick wickets, with the last being a run out, with the game ending in a tie. The result leaves Elworth 33 points behind Audley in the last place above the drop zone.

Hem Heath collected the winning draw against Burslem at home. Liam Banks hit 103 for the home side as they posted 241-8. Burslem then closed their innings on 194-5 from 59 overs, Michael Rowley top scoring with 51.

Little Stoke take top spot with an eight wicket home victory against Betley. The home side restricted Betley to 163 taking the final wicket with the last ball of the innings, Gareth Morris being the pick of the bowlers with 6-38. In response Little Stoke got off to a positive start, putting on 140 for the first wicket, Richard Adams hitting 65 and Joseph Smith finishing on 62. Peter Turnbull and Daniel Richardson then saw their side over the line in the 49th over, putting them four points clear at the top of the league.

Meakin sit in second place, collecting the winning draw at home in a game filled with runs against Sandyford. The home side won the toss and elected to bat, which looked to be the correct decision when Peter Wilshaw smashed 136 not out off 107 balls and Ben Mcquire hit 65, enabling them to declare on 330-4 from 50 overs. In the second innings Sandyford were reduced to 56-3, but recovered to close their innings on 311-7 from 60 overs, Sohail Rauf hitting 118 off 100 balls, while Danny French and James Pringle both hit half centuries.

Moddershall relinquished their grip on the top spot with a three wicket defeat against Silverdale. Having been put into bat Moddershall were restricted to 163-9, Matt Goodwin finishing on 52 not out as Silverdale shared the wickets around. In the second innings Silverdale captain Mitchell Stokes top scored with 58 as his side passed the target in the 54th over. The defeat leaves Moddershall five points adrift of Little Stoke and a single point outside the promotion places.

Cheadle couldn’t take advantage of Moddershall and Meakin failing to win, only managing a losing draw themselves against Blythe. Alex Heslop hit 109 and Asif Hussain finished on 70 helping their Blythe side post 304-7 from their 55 overs, while Steve Morgan picked up a five wicket haul. In reply Cheadle captain Shaun Jenkinson (105) hit a century of his own, with Darren Plant (63) and Paul Shaw (53) also hitting half centuries as they closed their innings on 286-6. They now sit 18 points off top spot.

Barlaston move away from the drop zone beating basement side Meir Heath by six wickets. At home Meir Heath decided to bat but fell for just 123, Michael Dyer taking 4-17, for Barlaston. In the second innings Barlaston shared the runs around the batting line up, chasing down the total in the 31st over. Meir Heath are now 30 points behind Betley and safety, while Barlaston move 20 points ahead of Alsager in the drop zone.

Alsager were comfortably beaten by eight wickets at home against Ashcombe. Batting first the home side were blown away by Rizwan Haider (8-38) for just 88. Nick Goodwin (45no) then carried his batting seeing his side over the line.

Stafford move top of table picking up maximum points away at Norton with a 93 run victory. The away side had starts throughout the top and middle order, being dismissed off the last ball of the innings for 237, with Joel Bayley taking 5-47 for Norton. In reply the home side lost wickets at regular intervals, Kashif Hussein doing the damage with 5-33, as Norton were all out 144.

Last week’s leaders Kidsgrove drop to second with a winning draw against Oulton. Electing to bat first Kidsgrove posted 282-7, with Richard Hagan smashing 108 not out off 98 balls in an innings which included six sixes as well as Ryan Davis hitting 81. In response Oulton fell from 133-3 to 157-8, eventually closing their innings on 165-8 from 58 overs, Ian Bailey taking 5-39 for Kidsgrove who now sit six points behind Stafford.

Newcastle& Hartshill beat strugglers Bignall End by seven wickets, keeping the pressure on the top two. Nasir Malik was the pick of the bowlers for Newcastle & Hartshill with figures of 6-42, dismissing Bignall End for 135 from 35 overs in the first innings. Malik then saw his side over the line with 47 not out off 28 balls, putting his side within seven points of top spot, while Bignall End are 30 points adrift of Weston and safety.

Weston are still in touching distance of the relegation zone, being beaten by two wickets by Leycett. Batting first Weston got off to a poor start at 0-1 and never recovered, being dismissed for 124, as Michael Barcroft collected figures of 5-30. In the second innings Chanaka Wijesinghe (55no) was the only Leycett batsmen to get to grips with the Weston bowling attack, guiding his side over the line after 43 overs with two wickets remaining.

Bagnall are starting to look adrift at the bottom of the table after a 144 run defeat away at Rode Park & Lawton. The home side won the toss and elected to bat, recovering from 38-3, Kevin McClean dominated with the bat hitting 131 not out off 90 balls, while Neil Chadwick (55) also hit a half century helping Rode Park & Lawton declare on 262-8 from 47 overs. In response Bagnall only had Asif Ahmed Khan (59) to reach double figures, following his five wicket haul in the first innings, as they were all out for 118. Bagnall now sit 49 points behind Weston and safety.

In mid table Endon picked up an important 37 run home victory against Caverswall. Batting first Endon were dismissed for 172, captain Alex Bailey top scoring with 57, as Gregory Phillips, Christopher Baranowski and Jeandre Ludick all took three wickets for Caverswall. The away side were then removed 135, Elliot Wright (50) the only batsmen to make it past 20, with Endon sharing the wickets around.

League leaders Eccleshall were unable to carry on their momentum, only managing a winning draw against Oakamoor. After being put into bat Eccleshall declared on 259-7 from 50 overs, with runs throughout the innings Natahn Hinton top scored with 60. In reply Oakamoor closed their innings on 211-9, Tom Sherratt hitting 55, while Eccleshall had just one ball at Oakamoor’s number 11. The draw leaves Eccleshall 26 points clear of second place Woore.

Woore closed the gap at the top with maximum points against Leek & Moorlands winning by 96 runs. Muhammad Arshad finished on 118 not out helping his Woore side declare on 251-8 from 51 overs, Navid-Ul-Khurram Kaleem also hit 51. In the second innings Leek were removed for 155, who now sit just 14 points clear of the drop zone; Taz Hussain was the pick of the bowlers collecting figures of 4-23.

Crewe lost ground on the top two, being comfortably beaten at Hanford by nine wickets. Batting first Crewe were blown away for just 57, Zafar Iqbal (6-31) and Chris Mellor (4-24) doing the damage for the home side. It then took Hanford just 12.5 overs to knock the total off, Iqbal top scoring with 37. Crewe slipped to 35 points behind Eccleshall and nine below Woore.

At the bottom of the table Norton-In-Hales couldn’t follow up last week’s victory as they were beaten by 53 runs at home against Fenton. After electing to bat first, Fenton posted 212-9 from their 55 overs, Brian Sims top scoring with 66. In the second innings John Woodfield hit 76 as his Norton-In-Hales side were removed for 159 from 41 overs, Johhn Seabridge being the pick of the bowlers for Fenton taking 5-58. Norton-In-Hales are now 14 points behind Leek, with a trip to Crewe next week.

Church Eaton beat Wedgewood by seven wickets at home. Winning the toss and electing to bowl, Church Eaton reduced Wedgewood to 98 all out, Andrew Hogarth taking 6-51. The home side then knocked off the target in the 23rd over for the loss of three wickets, moving 32 points above basement side Norton-In-Hales, while Wedgewood are now just 25 points ahead.

In mid table Stone SP secured a three wicket home victory against Forsbrook. Batting first the away side lost wickets at regular intervals, managing to post 211-9. In response Stone SP’s Neal Podmore saw his side over line with 60 not out, after Richard Whitehead scored 52 coming in at number three.