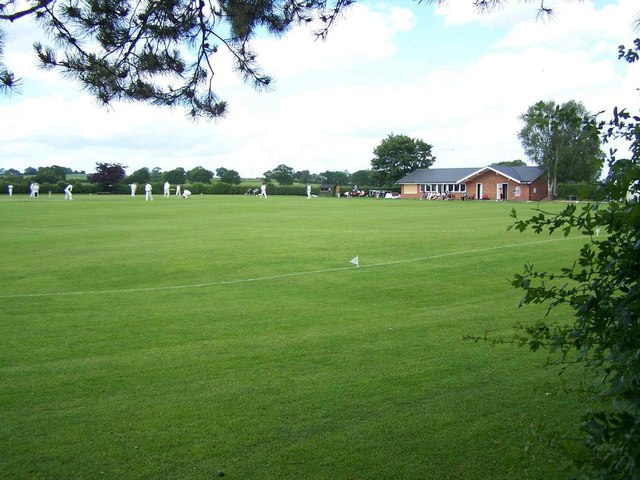 Checkley increased the gap at the top to ten points with a 57 run victory over Audley. After being asked to bat first, Checkley’s Andy Carr carried his bat finishing on 90 not out, guiding his side to post 182-8, while Tom Oaks collected figures of 4-59. In reply the struggling Audley lost wickets at regular intervals finally being dismissed for 125 in the 48th over with Richard Cooper taking 5-55. The win leaves Checkley 10 points above Longton who moved into second place.

Longton moved up the league, beating basement side Elworth by 65 runs. After recovering from 29-3 Longton scrambled their way to 144-9, as Yasir Ali, Thomas Bates and Christopher Winter all took three wickets for Elworth. In response Elworth never got going with the bat, being reduced to 79 all out, Chris Hampshire the pick of the bowlers for Longton with 4-26. Defeat leaves Elworth stranded at the bottom 35 points adrift of Audley and safety, whereas victory puts Longton into second place, 14 points clear of Porthill.

Porthill could only manage a winning draw on their travels against Burslem. Batting first with runs throughout their line up Porthill posted 219-9, Rao Ifthikar Anjum top scoring with 59 not out. In the second innings the home side closed their innings on 201-8 after 55 overs, Kevin Mountford (50) hitting a half century. With the draw Porthill sit 24 points behind top of the league Checkley, as Burslem move to 18 points clear of the drop zone.

Knypersley lost for the second week running, beaten by six wickets away at Stone. After being put into bat Knypersley had starts in the top order but nobody could go on, Dan Ball top scoring with 46, as his side closed on 176-6. In reply James Dawson carried his bat with 93 not out, supported by Phillip Cheadle (51), as they recovered from 0-1, to reach the total in the 44th over, with six wickets remaining. Knypersley have slipped to 26 points behind Checkley, while Stone are 29 points adrift.

Leek’s nearly season continued, with their fourth winning draw of the campaign against strugglers Wood Lane. Tom Steele (75) and Alex Thompson (57) hit half centuries for Leek being the main run scorers as they were reduced to 198 all out in the 54th over, Elliot Maginnis (5-49) collecting a five wicket haul. In response after a solid start Wood Lane lost wickets at regular and fell to 132-9 with Thomson taking 5-35 putting Leek in control. Maginnis then pushed his side over the 150 mark for an extra point, closing their innings on 151-9, leaving Wood Lane just four points behind Audley and safety.

Whitmore could only manage a winning draw at home against Hem Heath. The home side were put into bat and were restricted to 186, with Hem Heath sharing the wickets around the bowling attack. In the second innings the visitors clung on to a draw closing on 154-9.

Little Stoke maintain their lead at the top with an eight wicket victory against Ashcombe. Electing to field first Little Stoke reduced the home side to 181 in the 45th with only Rizwan Haider getting to grips with the bowling attack finishing on 88, as the wickets were shared around. Richard Adams (79no) and Peter Turnbull (67) set up the victory with the bat putting on 138 for the second wicket, passing the total in the 49th over.

Meakin remain in second place successfully chasing down 283 at home against Blythe. The away side won the toss and decided to bat, Craig Grimley (64), Dan Hammond (62no) and Greg Prime (50) all hit half centuries, helping their side post 283-6. In reply Richard Hassall came in at 149-4, smashing his side to victory with an unbeaten 107 off 60 balls. With the victory Meakin are still four points behind Little Stoke and six points in front of Moddershall.

Moddershall could only manage a winning draw at home against Alsager. Khalid Malik top scored with 72 for the home side as they set Alsager 221 to win, as Gareth Rowe picked up 5-83. In response Alsager closed their innings on 163-8 with Sean Price hitting 60, while kashif Bhatti collected figures of 4-40. The win leaves Moddershall 10 points behind top of the table Little Stoke; Alsager are 20 points adrift of Barlaston and safety.

Cheadle maintained their challenge at the top picking up maximum points against Barlaston, winning by 57 runs. Cheadle’s number eight Ryan Day top scored with 41 helping his side reach 204 before they were dismissed. In the second innings Barlaston got off to a woeful start falling to 40-5 and they never recovered, finally being reduced to 147 all out, Chris Barker being the pick of the bowlers with 5-46. Cheadle, with the win, move to within 12 points of Little Stoke.

Bottom of the table Meir Heath narrowly lost by one wicket away at Betley. Faisal Irfan Butt did the damage with the ball for Betley taking 6-61reducing Meir Heath 110 all out. In reply the home side fell to 48-6 putting Meir Heath in the driving seat, which then became 100-9, but Butt (52no) and Matthew Holmes (7no) guided their side over the line in the 46th over. Defeat leaves Meir Heath 34 points behind Barlaston and safety.

Silverdale came away with the winning draw at Sandyford. Mitchell Stokes (106no) and Stephen Jones (84) put their side in a position to declare with the score on 276-5 after 52 overs. After a poor start at 19-2, Sandyford recovered to close their innings on 197-8, Oliver Thomas top scoring with 57.

Stafford remain at the top of the division, picking up maximum points against Endon winning by 68 runs. Stafford’s Dave Foster put in a captain’s performance hitting 85 in the first innings as his side posted 237-9, while Gareth Rigby took 8-78 for Endon. In the second innings Foster collected figures of 4-25, removing Endon for 169 putting his side seven points clear at the top.

Newcastle & Hartshill move into second place with a comfortable 84 run victory against Caverswall. James Collet (61) and Jake Short (60no) both hit half centuries to help their side post 208-7. In the second innings Nasir Malik collected figures of 6-61, blowing away the Caverswall middle order, dismissing them for 124.

Kidsgrove drop to third with a shock seven wicket defeat at basement side Bagnall. Rob Bennett took 6-41 as high flying Kidsrove were reduced to 111 all out after deciding to bat first. In response Asif Ahmed Khan (49no) and captain Simon Gordon (28no) guided their side over the line in the 26th over with seven wickets in hand, to leave their side 54 points behind Weston and safety, while Kidsgrove fall 28 points adrift of top spot.

Norton kept their promotion hopes alive with a seven wicket victory away at Oulton. Shawn Hunt top scored for the home with 63, helping his side post 192-8, while Yasser Tariq took 5-90. In the second innings Joel Bayley carried his bat finishing on 104 not out as his side chased down the total in the 43rd over. Victory leaves Norton just in touch of the top two, 31 points behind Newcastle & Hartshill.

Bagnall’s win made the victory claimed by Weston even more important, as they beat relegation rivals Bignall End by 27 runs. Chris Barratt hit 49 helping his side set Bignall End 191 to win, while Adrian Myatt took 5-80. In reply Bignall got off to a solid start, with an opening stand of 81, but wickets then tumbled, finally being dismissed for 163 in the 62nd over. Weston move 46 points clear of Bignall End who sit in the relegation zone.

Rode Park & Lawton collected a winning draw at home against Leycett. After being put into bat the home side posted 246-9, with Daniel Wellings (92) and Jonathon Gilmore (50) both hitting half centuries. Chanaka Wijesinghe then hit 123 not out in the second innings for Leycett as his side closed their innings on 224-8.

Eccleshall continue their march on the division three title with a comfortable 138 run victory against Church Eaton. David Hibbert dominated the Church Eaton bowling attack finishing on 133 enabling his side to declare on 230-2 in the 48th over, with both Nathan Hinton (43no) and Jake Derry (40) playing the support act. It was then Cameron Sinclair’s turn collecting figures of 8-30 reducing Church Eaton to 92 all out.

Woore remain in second place, picking maximum points up themselves, beating Hanford by 69 runs. Woore won the toss and decided to bat, managing to declare after 46 overs with the score on 239-9 with runs all down the innings, while Zafar Iqbal took 7-91 for Hanford. In the second innings Taz Hussain (7-58) took a seven wicket haul of his own, reducing Hanford to 170 all out, Andrew Pickerill top scoring with 45. With the win Woore remain 26 points behind Eccleshall, but nine points ahead of Crewe.

Crewe also picked up 25 points with a 90 run victory at home against Norton-In-Hales. Batting first Crewe needed late runs from Phillip Marsh (71) and David Hurst (45) to push the total up to 221 all out from 42.1 overs, Kyle Morgan taking 5-28. In response the away side didn’t get going with the bat apart from Callum Laydon who finished on 52 as his side were removed for 131. Crewe remain 35 points behind top of the table Eccleshall, while Norton-In-Hales are still 14 points from safety.

It’s Leek & Moorlands who sit above them and the drop zone, losing to relegation rivals Wedgewood & Stanfields by three wickets. Being put into bat Leek’s opener Will Leeson played the anchor role, helping his side recover from 24-2 to 160-6 when he was dismissed for 71. Leek were finally removed for 197 in the 49th over, as Ramzan Mohammed took 5-35. In reply Wedgewood made it over the line after 47 overs, Josh Edge top scoring with 48, but it was James Stephens (44no) who saw his side to the finish. Wedgewood move 37 points clear of the relegation zone while Leek are just 14 points from the drop.

Oakamoor travelled to Forsbrook winning by two wickets to move 54 points above the relegation zone. Batting first the home side lost wickets at regular intervals, with only Andew Jones (31) coming to terms with the wicket, being removed for 148; Matt Wolff was the pick of the bowlers with 3-46. In the second innings Oakamoor lost three quick wickets, but James Smith (40) and Matt Carnwell (35) put their side in a winning position, but a flurry of quick wickets left Adam Keates (24no) and Wolff (6no) to see their side over the line.

Stone SP picked up maximum points on their travels beating Fenton by 25 runs. The whole of the Stone top order got starts, but couldn’t go on, being removed for 201 as Fenton shared the wickets around. In response Brian Simm’s efforts were to no effect as he carried his bat through the innings to finish on 99 not out, as his side fell from 163-4 to 176 all out, with only Paul Farmer (33) to make double figures in support.