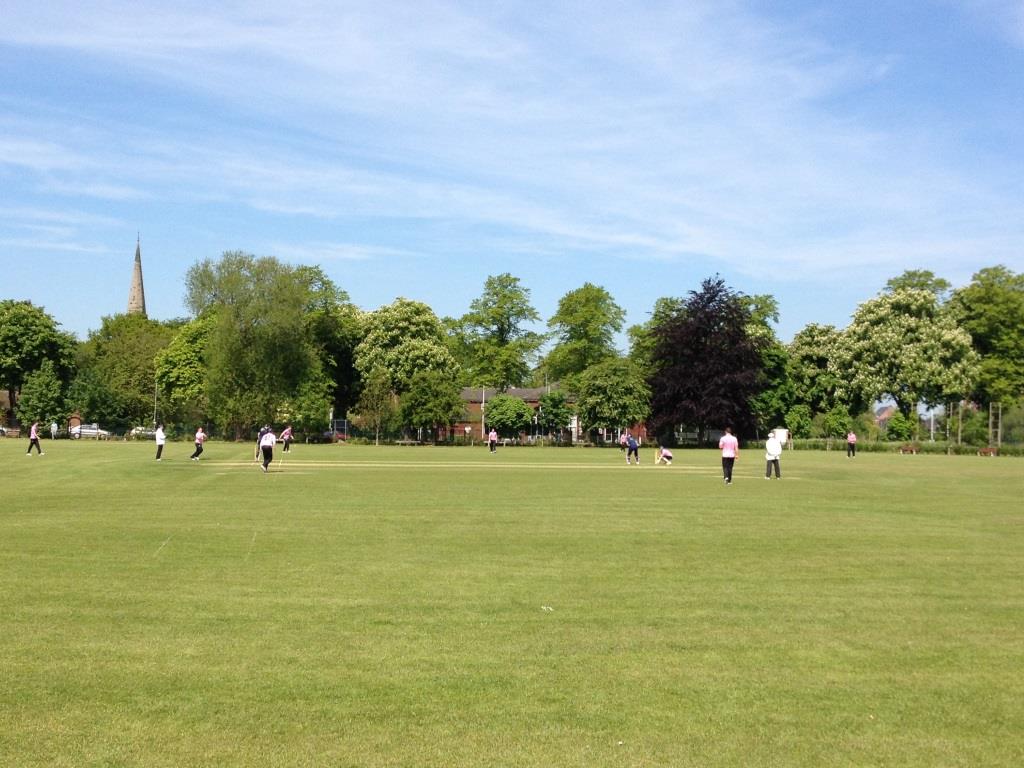 League leaders Checkley captured a winning draw against title rivals Longton. Batting first Checkley declared in the last over, posting 221-9, captain Michael Allen top scoring with 77, Nick Hunt (55) also passing fifty, as Craig Barker bagging 4-32. In reply Longton got off to a terrible start and never recovered, closing their innings on 79-9 after 47 overs, Richard Cooper collecting figures of 4-32 for Checkley. With the draw Checkley extend their lead over second place Leek by two points moving to 10 points clear.

Leek collected their fifth winning draw of the season when they travelled to Burslem, to keep the pressure on Checkley. Being put into bat Leek had starts in the top order, but it was Chris Beech who went on, top scoring with 78, helping his side to hit 223-7, while Michael Brown took 4-89. In response Burslem were reduced to 46-4, but recovered to 80-4 when they closed their innings after 35 overs. The draw leaves Leek five points above Stone in third and 10 behind top of the table Checkley.

Stone closed the gap on the top two beating Porthill at home by seven wickets. Stone won the toss and put the away side into bat, reducing them to 6-3, eventually dismissing Porthill for 114, Dries Nell the pick of the bowlers with 3-34. In the run chase Luke Cheadle led the way with 67 not out, guiding his side over the line in the 28th over.

Knypersley’s championship hopes took a blow with a losing draw at basement side Elworth. The home side batting first, posted 270-4 from their allotted overs, Yasir Ali smashing 130, supported by opener Chris Regan with 67 not out. In the second innings Knypersley closed their innings on 133-5 after 56 overs. The draw leaves Knypersley 30 points behind Checkley, while Elworth are 37 points adrift of Burslem and safety.

Audley, who were comfortably beaten by 79 runs against Hem Heath, sit directly above Elworth. Batting first Hem Heath were dismissed for 168, Thomas Oaks taking 7-52 for Audley. In response Audley never got to grips with the Hem Heath bowling attack and were blown away for 89 inside 32 overs.

Whitmore beat relegation threatened Wood Lane at home by eight wickets. Having dismissed the away side for 100 – Lee Johnson (5-44) collecting a five wicket haul, Raja Hayat saw his team over the line in the 22nd over with two wickets in hand, finishing unbeaten on 50. Defeat leaves Wood Lane just 11 points above the drop zone.

Meakin consolidated their place at the top with a comfortable 153 run victory at home against Alsager. After winning the toss and deciding to bat the home side had starts throughout the batting line up, allowing them to declare on 242-7 after 52.3 overs, while Gareth Rowe collected figures of 4-74. In the second innings Dave Edwards shone with the ball taking 7-27 to reduce Alsager to 89 all out. With the victory Meakin extend their lead to 24 points over Little Stoke, while defeat leaves Alsager stranded at the bottom 30 points from safety.

Little Stoke remain in second place with a five wicket victory against Sandyford. Naveed Arif was the pick of the attack with the ball for Little Stoke in the first innings taking 4-28, dismissing Sandyford for 110. In reply Little Stoke stuttered their way to the total with Joseph Smith top scoring with 48 before he was run out. The win means the gap between themselves and third place Moddershall increases to 10 points but fall 24 points adrift of Meakin at the top.

Moddershall move back up into third place with a winning draw at home against Meir Heath. Kashif Bhatti smashed 85 off 72 balls, putting his side in a healthy position at 226-7, with Tom Ball (53) also passing fifty.  In the second innings Moddershall were unable to take the final wicket as Meir Heath closed their innings on 167-9 after 49 overs. The draw puts Moddershall in third place 34 points behind Moddershall but they do move five points clear of Cheadle in fourth, while Meir Heath are 17 points below safety and Barlaston.

Cheadle lost ground on the top with a 44 run defeat at Ashcombe. After being put into bat the home side were reduced to 25-5, but battled back in the middle order, finally being dismissed for 131, as James Sellers collected figures of 5-38. In reply Cheadle got off to a similar start, only having Sellers (37) and Ryan Day (20) to make it into double figures, being bowled out for 87, inside 24 overs. The defeat means Cheadle fall 39 points off the pace at the top.

In mid table Silverdale beat Blythe by 63 runs. Being put into bat Silverdale, they only manage to set Blythe 119 to win after being dismissed in the 46th over, with Tom Holdway being the pick of the bowlers collecting figures of 4-20. In response Blythe had a disastrous day with the bat falling for 55, thus slipping to 25 points above the drop zone, as Mitchell Stokes took 6-12 from 10 overs.

Barlaston gained a winning draw away at Betley. Bronson Meehan hit 97 for the visitors helping his side reach 211, finding support in Chris Plant (46) and Jack Davies (30). In reply Tom Forster was the backbone of the Betley innings hitting 70 as his side closed on 128-7 from 48 overs.

The league leaders Newcastle & Hartshill experienced defeat for the fourth time this season, being beaten by 27 runs against Oulton. Jono Whalley carried his bat for Oulton to finish 84 not out, helping his side post 212-8, as Tom Phillips also hit 57 at the top of the order. In reply Newcastle & Hartshill got off to a poor start being reduced to 46-4 and were finally dismissed for 185, despite Simon Wood’s 75. The defeat wasn’t too costly as second place Stafford who sit 11 points adrift also lost.

Stafford couldn’t take advantage of Newcastle & Hartshill’s misfortunes, beaten themselves by five wickets at home against Weston. After winning the toss and deciding to bat first Stafford were reduced to 161 all out, Alex Matthews and Chris Barratt both taking three wickets for the visitors. In response Weston had contributions through the batting line passing the target in the 38th over. The victory lifts Weston 61 points clear of the drop zone leaving the bottom two sides stranded while Stafford are 11 points behind the league leaders.

Norton took full advantage, closing the gap on the top two sides by beating Rode Park & Lawton by eight wickets. Liam Williams (6-18) and Yasser Tariq (4-34) did the damage for Norton restricting the home side to 57 all out. Norton then knocked off the runs in the 11th over to move just two points behind Stafford.

Kidsgrove gained the winning draw against Leycett to remain in touching distance of the promotion places. Kidsgrove opener Dave Leese top scored for his side with 69, as they posted 222-9 from their allotted overs, while Richard White took 5-39. In the second innings Leycett lost wickets at regular intervals, but managed to hold on to the draw, closing their innings on 123-9 after 48 overs. Kidsgrove remain in the hunt for promotion, sitting in fourth 20 points adrift of Stafford.

At the other end of the table basement side Bagnall were beaten by 40 runs at home against local rivals Endon. The visitors, after being put into bat were dismissed for a moderate 147, Jordan Weaver (59) top scoring, as Asif Ahmed Kahn collected figures of 5-41. In reply Bagnall fell for 107 in the 38th over, leaving them a huge 75 points adrift of Weston and safety.

Fellow strugglers Bignall End also experienced defeat, losing by 17 runs away at Caverswall. Deciding to bowl first Bignall End restricted the home side to just 159-7, but after  securing a solid start to the run chase they were dismissed for 142, Nazakat Ali and Jeandre Ludick both collected five wicket hauls for Caverswall. The defeat means Bignall now fall 61 points behind Weston and safety.

Eccleshall continued their march to division two with a comfortable seven wicket victory against strugglers Leek & Moorlands. After being put into bat Leek were removed for 95 in the 49th over, with the league leaders sharing the wickets around the bowling attack. In the second innings, opener David Hibbert (54no) and Robert Lakin (38no) guided their side to victory in the 28th over, to leave the gap between themselves and second place Woore at nine points, whereas Leek are just 18 points clear of the drop zone.

Woore kept the pressure on the table toppers, taking maximum points against Stone SP, in a 159 run home win. Muhammad Arshad struck 115 not out, putting his side in a position to declare after 44 over with the score 229-7, with Harry Oliver also hitting 54. In response Stone only had two batsmen to make it into double figures, falling for a disappointing 70 all out, as Taz Hussain was the pick of the bowlers with 4-11. Woore are now just nine points behind Eccleshall, but 42 points above third place Crewe.

Crewe’s hopes of promotion faded, only managing a winning draw at home against Oakamoor. Batting first the home side had George Harding (77no), Bernie Bishop (64), Hammad Usman (58) and Mark Hurst (53) all make half centuries, as they posted 297-6 from their allotted overs. In reply Oakamoor closed on 237-7, from 69 overs, Matt Carnwell top scoring with 54, with Tom Sherratt (48) and Mark Fallows (41) making it into the forties. Crewe fall 42 points behind the promotion places with the draw, while Oakamoor are 59 points clear of the drop zone.

At the bottom end of the table basement side Norton-In-Hales had a disappointing result away at Wedgewood & Stanfields, beaten by 57 runs. The home side, batting first declared on 205-9 from 50 overs, Oliver Holland top scoring with 55. In response the visitors got off to a terrible start being reduced to 2-2, but did recover before being dismissed for 148, Adrian Lello being the pick of the bowlers for Wedgewood with 4-40. Defeat leaves Norton-In-Hales 18 points behind Leek and safety, while Wedgewood moved 63 points clear of their opponents.

Church Eaton also moved away from the bottom two with a six run victory against fourth place Hanford. Despite losing wickets at regular intervals Church Eaton managed to set the visitors 178 to win, with Jonathon Arnold (58) top scoring. Arnold then took match winning figures of 6-58 from 29.1 overs, as Hanford fell for 171 in the 67th over. The win puts Chrurch Eaton 47 points above Norton-In-Hales and the drop.

In a low scoring game Forsbrook travelled to Fenton coming away with a four wicket victory. After being put into bat the home side were dismissed for 107, with captain John Seabridge (43) the only batsmen to put up any real resistance, as Andrew Jones took 9-46. In the second innings the visitors lost wickets at regular intervals but Michael Brocklehurst (29no) guided his side over the line in the 37th over.