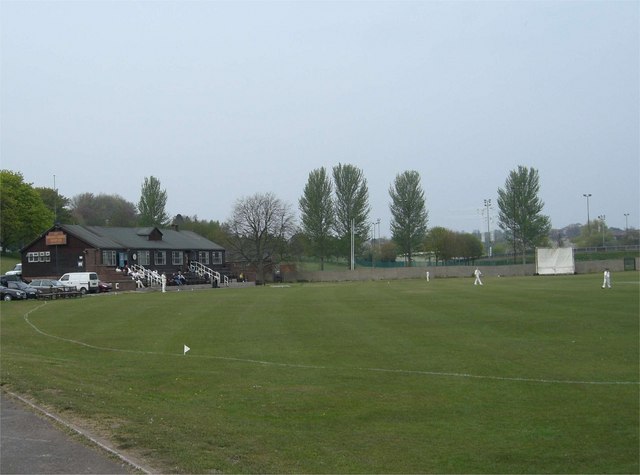 Stone move to the top of the table collecting the greater amount of points in the abandoned game against Leek who drop to second. Having been put into bat Stone declared on 226-5 after 54.4 overs, David Womble (85) and Luke Cheadle (74) putting on an opening stand of 151. The second innings was then washed out after 13 overs with Leek on 40-1, putting Stone three points clear at the top.

Third place Checkley also saw their saw their game against Hem Heath abandoned, with only 14.1 overs possible in the second innings. In the first innings Checkley had posted 199-3 from their allotted overs, captain Michael Allen (76) and Daniel Spasic (51no) both hitting fifties; in reply Hem Heath closed their innings on 19-2. The wash out puts Checkley eight points off  thetop spot and five behind Leek.

Porthill closed the gap on the top three managing to force a winning draw away against bottom of the table Elworth. After being put into bat, the home side were dismissed in the 51st over for 166, Lee Morris top scoring with 63, while John Hancock took 5-40. In response Porthill made it to 126-6 from 31 overs, Rao Ifthikar Anjum unbeaten on 52, giving them the winning draw, moving to within 14 points of Stone, whereas Elworth are 42 points from safety and Wood Lane.

The two other teams in the hunt for the title Knypersley and Longton saw their game abandoned with just two overs possible in the second innings. Batting first Knypersley closed their innings on 169-6 with runs throughout the batting line up, putting them 21 points off top spot while Longton are 23 points adrift.

The two remaining games were also washed out. At the bottom, Audley’s game against Wood Lane was called off after the first innings with Audley finishing 159-9 after 51 overs, Dean Bedson top scoring with 77, leaving them 12 points behind Wood Lane and safety.

The same was the case at Whitmore who took on Burslem with no play possible in the second innings, as Burslem were dismissed for 130 in the first, Lee Johnson taking 5-55 for Whitmore.

It’s all the same at the top with the leading two teams both seeing their games abandoned. Meakin restricted Meir Heath to 202-8 from 50 overs, but only 2.1 overs were possible in the second innings.

Little Stoke had the same fate at Silverdale, where a ball wasn’t bowled in the second half. Mitchell Stokes hit 98 for Silverdale in the first innings helping his side reach 198-8, meaning the gap between Meakin and Little Stoke remains at 11 points.

Moddershall and Barlaston’s game was abandoned 9.1 overs into the second innings. Batting first Moddershall posted 205-5 from 53.2over, Frasier Hawkins top scoring with 58. Barlaston then closed their innings 15-1, leaving Moddershall four points outside the promotion places.

Fourth place Cheadle couldn’t force a result away at Sandyford. Batting first the away side were reduced to 104 all out, captain Darren Plant top scoring with 49 not out, while Sohail Rauf took 6-42. In reply Sandyford were restricted 19-3 from nine overs, when the rain came.

Alsager collected the winning draw at home against Blythe. Having put the visitors into bat Alsager dismissed Blythe for 174 in the 51st over, Dan Hammond  (72) finding support in Tom Simcock (46), while David Apps picked up 5-45. In the second innings Blythe were looking for the win having reduced Alsager to 131-9, but the home side closed their innings on 133-9 from 36 overs, taking the winning draw.

Ashcombe were only one of four sides to be victorious in all four divisions, beating Betley at home by four wickets. Having dismissed the visitors for 91, with Rizwan Haider (5-29) picking a five wicket haul, Ashcombe knocked off the total in the 21st over with four wickets remaining, despite Faisal Irfan Butt’s (5-48) hat trick taking out the middle order. Defeat leaves Betley 26 points above Meir Heath and the drop.

It’s all change at the top as Stafford move to the top, beating Caverswall by seven wickets. Aparajit Singh Khuruna took figures of 7-40, helping his side dismiss Caverswall for 136, with Jeandre Ludick (74) the only batsmen to get to grips with the Stafford bowling attack. In reply Greg Massingham hit an unbeaten 52 to guide his side to the total in the 36th over, moving Stafford 10 points clear of Newcastle & Hartshill after they experienced defeat.

Newcastle & Harsthill slipped to second with a seven wicket defeat away at Rode Park & Lawton. Having been put into bat the visitors were reduced to 140 all out inside 35 overs, but then couldn’t really make an impact of their own with the ball as Rode Park reached the target with three wickets lost, Jonathon Gallimore guiding his side with 59 not out.

The other four games in the league were abandoned with very little action in the second innings. Oulton’s Jono Whalley was the star with the bat hitting 96 against Bignall End, as well as Norton’s captain Alex Graham scoring 66 against Leycett, while Weston’s James Littlewood (5-19) and Leycett’s Richard White picked five wicket hauls.

Church Eaton were the only side to pick up a victory in the division beating Stone SP by seven wickets, to end their relegation fears. Robert Hogarth did the damage for Church Eaton collecting 7-38, as Stone were dismissed for 85. Jonathon Arnold (48no) and Neil Archer (26no) then saw their side to the target in the 21st over to move 75 points clear of Norton-In-Hales and the drop zone.

Eccleshall extended their lead at the top picking up eight points against Hanford. The league leaders smashed 205-7 enabling them to declare after 42 overs, with runs through the middle and lower order. In reply Hanford were reduced to 57-7 when their innings came to a premature end after just 24.5 overs, Cameron Sinclair taking 5-19 for Eccleshall moving the gap to 12 points over Woore.

Chasing Eccleshall, Woore only managed five points against Forsbrook. Mark Bengry finished 50 not out as his Woore side declared on 197-6 after 40.5 overs, but only one over was possible in the second innings as Forsbrook closed on 0-1.

The game between the bottom two, Leek & Moorlands and Norton-In-Hales was abandoned  after 8.3 overs in the second innings. In the first innings Leek were all out for 108, Mathew Riley (4-29) the pick of the bowlers for the visitors. In response Norton-In-Hales closed their innings on 13-0 when the rain came, as they narrowed the gap between the two to 25 points.

The two remaining games were also abandoned Stephen Atkinson the pick of the bowlers for Fenton with figures of 6-86 against Crewe, while Oliver Holland (63) and Ramzan Mohammed (59no) both hit fifties against Oakamoor for Wedgwood Stanfields.