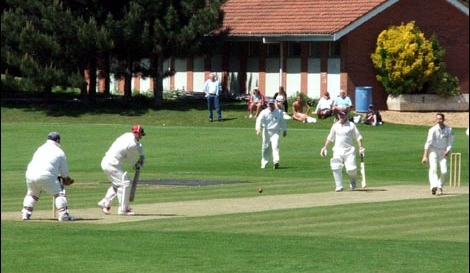 Wood Lane move within 14 points of Leek after another rain hit weekend. Wood Lane were the only team in the division to get a positive result, beating strugglers Little Stoke by eight wickets. Asad Ali claimed figures of 6-54 and fellow opener Steve Norcup (4-21) dismantled the Little Stoke batting line up as they were dismissed for 76. In reply Jamie Jervis top scored with 33 not out as the home side chased down the total after 17 overs, with eight wickets in hand.

Nayyar Abbas’ five wicket haul was in vain, as his Knypersley side didn’t have full opportunity to chase Stone’s score of 177-8, as only 19 overs were playable and they finished on 58-2.

Ben Mcquire smashed 71 as Hem Heath posted 214-8 against second from bottom Burslem but the rain once again interrupted. Burslem closed their innings on 33-1 from 12 overs and are now 15 points adrift of Little Stoke and safety.

Fellow strugglers Cheadle had their game abandoned at home against Longton, but they did manage to get the first innings in, which saw Cheadle being dismissed for 72. They now sit 54 points from safety.

Checkley also saw their home game abandoned against Audley, with the away side on 161-3.

With the leaders Elworth being abandoned against Meir Heath the game between second place Whitmore and third place Sandyford was crucial, but it ended in a draw with only 6.2 over bowled in the second innings. Whitmore batted in the first innings and were all out after 55 overs for 140, but Sandyford’s innings was closed early with them on 12-1. Whitmore are now 47 points behind Elworth, but are 45 in front of Sandyford.

At the bottom Betley couldn’t get the win needing one more wicket for victory and ended up with the losing draw against Leycett. Betley set the away side 144 to after they were all out in the 47th over, Tas Hussain taking 5-43 for Leycett. In reply the away side closed their innings on 123-9 after 33 overs to claim the winning draw. Darren Snape picked up 5-46, but his Betley side are 79 points from safety in the form of Moddershall, who escaped with a draw against Meakin.

Moddershall were dismissed for 99 from 35.2 overs, Dave Edwards the pick of the bowlers for Meakin with 4-39. In reply Meakin finished on 95-4 after 19 overs, finishing four runs shy of victory.

Fourth place Silverdale travelled to Blythe but their game was abandoned. Early Silverdale had batted first and declared on 248-7 from 53.3 overs, Stephen Jones hitting 112 and they had the home side struggling on 19-4, when it was called off.

Barlaston against Norton was abandoned after 39 overs.

The difference between the top two teams Newcastle & Hartshill and Ashcombe Park didn’t change with both having their games abandoned against Woore and Caverswall respectively.

Third place Alsager took full advantage of the teams above them being called off, beating Kidsgrove by four wickets. Paul Newnes (5-27) was the pick of the bowlers for Alsager as the away side were reduced to 97 all out. In reply Alsager chased down the target in the 31st over and are now 10 points behind Ashcombe.

At the bottom of the table Oulton could only manage a losing draw against Weston. Jono Whalley hit 59 for rock bottom Oulton as they were all out for 150. Weston then closed their innings on 131-7, Phillip Stockton (57) top scoring. Oulton are eight points behind Woore and safety.

Rode Park & Latwon who also sit in the relegation zone were beaten by seven wickets against Stafford. Aparajit Singh Khurana (5-18) and Kashif Hussein (5-53) shared the wickets for Stafford as they dismissed the away side for 98. Captain Dave Foster hit 51 as his Stafford side reached the target after 30 overs.

Bignall End leap-frog Eccleshall in mid table after they beat them by six wickets chasing down 155. Eccleshall had runs through out the innings but were dismissed in the 55th over, Simon Howle the pick of the bowlers with 6-56. Howle then hit 48 in the second innings but it was Harry Jones that saw his side over the line with 43 not out.

Wedgewood & Stanfields moved within three points of leaders Bagnall after they managed to get a winning draw against Norton-In-Hales. In the first innings Wedgewood were bowled out for 133, Simon Ellwell taking 5-23, but in reply Norton-In-Hales were in trouble from the start and closed their innings on 47-6.

Bagnall’s game was abandoned against Fenton, but not before Asif Raza could smash 92 off 61 balls, which included seven sixes as Bagnall hit 185. There were only 13.2 over playable in the second innings.

Crewe gained the winning draw away at Forsbrook after being dismissed for 97 in the first innings, Fida Hussain was the pick of the bowlers for Forsbrook. The home side then closed their innings on 48-6 from 29.1 overs.

Games between Endon and Moddershall, Hanford against Oakamoor and Stone SP versus Church Eaton were all abandoned.