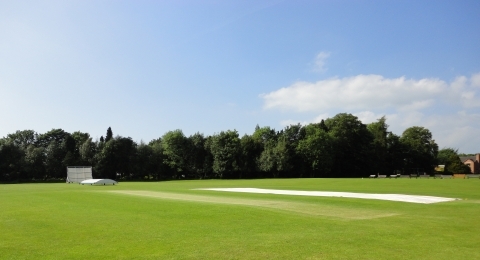 Leek became premier league champions, relegating Cheadle back to division one. Leek beat the visitors by 42 runs after a minor batting collapse, falling from 89-2 to 139 all out, Chris Barker doing the damage for Cheadle with figures of 5-38, Alex Mellor top scored for the champions with 66. In reply Cheadle’s innings never got going as Greg Willott (6-32) and Matt Bowcock (3-36) dismissed the visitors for 97.

Above Cheadle, Burslem kept their hopes of survival alive, while ending all hopes for Knypersley of becoming champions when they beat them by three wickets. Burslem dismissed the away side for 79, Phil Adams returning figures of 5-27, Dan Ball (40) the only batsmen to put up any resistance against the Burslem bowling attack. Burlsem then never got to grips with the Knypersley attack for stuttered their way to the finishing line with three wickets remaining. Burslem are now 11 points behind Little Stoke with the victory, but remain in the relegation zone.

Little Stoke nearly secured safety against Audley but they ran out of overs and closed their innings four runs short of the target and could only mange a losing draw. Little Stoke won the toss and put the home side into bat and Hamza Siddique (79) and Atta Ur Rehman (53)were the main run scorers, as Audley posted 236-8, Daniel Colclough the pick of the bowlers with 4-58. In reply Little Stoke got off to a great start, Richard Adams (85) and Spencer Byatt (55) putting on 91 for the first wicket. Little Stoke, getting closer to the target couldn’t get any momentum with three run outs, they eventually closed their innings on 232-7.

Even suffering a three wicket defeat against Longton, Hem Heath secured safety, 26 points ahead of Burslem. Hem Heath won the toss and decided to bat but got off to a poor start being reduced to 15-3, Craig Spearman hit 62 to stabalise the innings as they were dismissed for 120, Eddie Jones (5-28) and Craig Barker (4-62) doing the damage. Longton then lost wickets at regular intervals but David Fairbanks (58) guided them to within one when he was out with the score on 120-7 and they got over the line in the 42nd over. Longton sit in second 11 points ahead of third place Knypersley.

Wood Lane comprehensively beat Stone by eight wickets. Asad Ali did the damage for Wood Lane returning figures of 7-50 as the visitors were dismissed for 91. Jamie Jervis (36no) and Daniel Brierley (31no) saw their side over the line.

Porthill Park beat Checkley by two wickets, after successfully chasing down 119. Checkley got off to a poor start falling to 10-3, Ben Hazlegrave (25) helped them recover to post 119, Fahad Masood the pick of the bowlers for the visitors. Masood then hit 45 off 36 balls as his side reached the target in 33 overs, Ben Smith returned figures of 5-21 from four overs for Checkley.

Whitmore moved closer to the premier division, with a 17 run victory against relegated Betley. Justin Mould rescued Whitmore’s innings with 36 not out, as his side were dismissed for 96, Darren Snape taking 5-24. Imran Arif then blew away the Betley batting line up with 7-29 he sustained his side’s chances of being promoted, staying 19 points clear of third place Sandyford.

Sandyford keep Whitmore under pressure, beating Moddershall by 54 runs. Sandyford got off to a slow start being reduced to 43-3 but Jonathon Barnett (66) and Sohail Rauf (45) stabilised the innings, as they eventually declared their innings on 200-8, Matt Goodwin took 6-64. In reply there were plenty of starts for Moddershall but no one could go on as they were dismissed for 146. Moddershall are just two points above Leycett and the relegation zone.

Leycett were beaten by Silverdale as they stay in the bottom two. Leycett were all out for 148, Hassan Haleem top scoring with 65, being supported by Richard Walker (37). Mick Moore (41no) and John Shenton (10no) then saw their Silverdale side over the line, after Matt Baker had set the innings with 48. Leycett are now two points behind Moddershall who they play in the final game of the season, three points adrift of Norton and 25 points behind Barlaston.

Norton failed to move away from the bottom two, as their batting line up never fired against Meir Heath. Norton dismissed the home side for 184, Richard Stonier top scoring with a run a ball 83, which included six sixes, Tom Edwards supporting with 41, Ian Reynolds took 5-36 for Norton. In reply Joel Bayley hit 25 as his side were dismissed for 95, Iftikhar Asghar dismantling the batting line up with 8-40.

Barlaston have nearly secured safety after they picked up maximum points against Meakin. Jack Davies (51) and Alex Thorley (43) top scored for Barlaston as they posted 205-6. Mark Stayner then returned figures of 7-43 for Barlaston as Meakin were dismissed for 133. They are now 25 points clear of Leycett with one game left.

Champions Elworth beat Blythe by eight wickets. Blythe won the toss and after deciding to bat got off to a poor start, being reduced to 42-4. Dan Hammond then came to the crease and smashed 82 to help his side get up to 158, Yasir Ali was the pick of the bowlers for the home side with 5-34. Elworth in reply soon made inroads into the required total, openers Rob Beech and Mathew Winter both hitting 50, but it was David Toft (38no) and Peter Barnett (17no) who saw their team over the line.

Rizwan Haider helped Ashcombe Park remain favourites to be promoted out of division two as they beat Stafford by seven wickets. Haider took 5-24 in the first innings as the away side were dismissed for 114, he then smashed an unbeaten 57 as he saw his side over the line after 23 overs. Aschombe stay eight points clear of third place Alsager.

Alsager kept the pressure on Ashcombe after they beat Weston by five wickets. Martin Dawson top scored for Weston with 73 as his side were all out for 118, Gareth Rowe the pick of the bowlers for the home side with 4-29. In reply Sean Price saw his side over the line with 69 not out, as Alsager reached the target in the 30th over.

Rode Park & Lawton kept their hopes of survival alive when they beat relegation rivals Woore by four wickets. Rode Park put the away side into bat, Wayne Downing (56) and Mark Bengry (47) were the main run scorers for Woore, as they posted 175-9, Steve Liburd and Adam Donelley both took three wickets. Liburd then hit 76 not out for Rode Park as his side reached the total in the 46th over. They are now just five points behind Woore and safety, 16 points behind Bignall End and four points adrift of Eccleshall who also sit in the drop zone.

Oulton move to guaranteed safety, beating relegation threatened Eccleshall by 51 runs. Jono Whalley top scored for Oulton as they set the home side 149 to win. In reply Eccleshall, never got going with the bat and were eventually dismissed for 97, Tom Spruce the pick of the bowlers with 6-32.

Caverswall kept their slim hopes of promotion alive when they beat Bignall End by 68 runs. Jake Edge top scored with 64 as his Caverswall side posted 189-9. Bignall End then slumped to 121 all out, Tom East and Nazakat Ali both taking four wickets. Caverswall are now 21 points behind Ashcombe.

Champions Newcastle & Hartshill beat Kidsgrove by 100 runs. Muhammad Fayaz hit 125 not out for the champions as his side set the home side 254 to win. Fayaz then claimed figures of 5-36 as Kidsgrove were dismissed for 154.

Endon guaranteed promotion to division two with a four wicket victory over Forsbrook. Michael Dawson (4-40) and Jordan Weaver (4-15) took four wickets a piece as they dismissed Forsbrook for 68. In reply Endon lost wickets at regular intervals but George Sellers (22) held the innings together as his side reached the target in the 25th over. Shazad Liaqat claimed figures of 6-32. Endon now have to overturn a 15 point difference between them and Bagnall if they are to win the league.

Asif Raza aided Bagnall’s title hopes with the ball as they were able to defend 132 against Stone SP. Bagnall batted 50 overs before they were all out, James Ecclestone taking 6-31, but it was no problem for Raza who returned figures of 8-24, cleaning up the tail taking four wickets in four balls, dismissing Stone for 64.

At the bottom Moddershall A lost their fight to against relegation, only managing a winning draw against Norton-In-Hales. Moddershall managed to post 117-8, Matthew Cope top scoring with 39, Craig Ruscoe the pick of the bowlers with 5-55. Moddershall were then unable to bowl the home side out, even having 60 overs at their disposal, as Norton-In-Hales closed their innings on 96-8, Jack Chell taking 6-25.

Oakamoor comprehensively beat Crewe as they battle for fourth place. Eddie Brookes taking 5-19 as Crewe were all out for 43. Muhammad Ayub then smashed 41 as Oakamoor won by 10 wickets. They now sit one point behind Crewe and 23 points behind Wedgewood in third.

Wedgewood beat Church Eaton by 53 runs, when they were able to defend 137. Ramzan Mohammad top scored with 37 as Wedgewood closed their innings nine down, Matt White claimed 6-75. Adrian Lello was the main destroyer for Wedgewood with the ball taking 4-12, backed up by Adrian Lello Jnr and Mohammad both taking three as they restricted Church Eaton to 84.

Fenton beat Hanford by eight runs. John Seabridge (57) and Chris Mellor (55) were the main run scorers for Fenton as they set the home side 182 to win. Eddie Plant (5-54) and Seabridge then did the damage with the ball as Hanford were all out for 173.