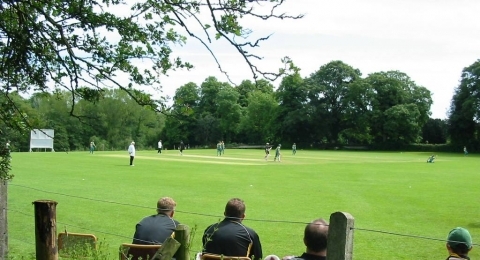 League leaders Checkley saw their game against basement side Elworth abandoned. The strugglers won the toss and decided to bat first posting 159-9, Kieran Allsop top scoring with 45, while Richard Cooper (5-48) picked up a five wicket haul. In reply Checkley closed their innings on 101-4 after 29 overs, which leaves them eight points clear of Leek at the top.

Leek took full advantage of others around them being affected by the weather, travelling to Longton and winning 56 runs. After deciding to bat first, Leek looked in trouble at 57-6, but Nadeem Malik batted with the lower order, guiding them to 184-9. In response Longton had a few starts with the bat, but nobody could go on as they were dismissed for 128, with Leek sharing the wickets around. The victory elevates Leek into second place eight points behind Checkley, whereas Longton slip to third just two points adrift of Leek.

Knypersley halted their run of defeats with a winning draw at home against Audley. The visitors won the toss and decided to bat and were restricted 177-8, Thomas Oaks top scoring with 49. Knypersley closed their run chase on 109-4 after 30 overs, cutting the gap at the top to 21 points, as Audley find themselves nine points from safety.

Stone collected the winning draw away at Hem Heath. Luke Cheadle hit 143 for the visitors, helping them declare on 266-4 after 53 overs, finding support in David Womble (55). In the second innings Stone couldn’t pick up the final wicket as Hem Heath closed their innings on 235-9 after 55 overs, with Jack Wood top scoring with 83. The draw leaves Stone level on points with Kynpersley21 points behind Checkley.

At the bottom end of the table Wood Lane moved away from the relegation zone with a comfortable 153 run victory at home against Burlsem. After being put into bat Wood Lane dominated the game, with openers Daniel Brierley (155no) and Ryan Hassett (103no) both hitting unbeaten centuries, enabling them to declare after 51 overs with the score on 269-0. In response the visitors got off to a poor start with the bat falling to 26-3 and never managed to recover, finally being dismissed for 106, in the 42nd over, Samiullah Khan was the pick of the bowler taking 5-58, supported by Steve Norcup with 4-22. The win moves Wood Lane 14 points above Audley and the drop zone, while Burlsem slip to nine points clear.

Porthill’s game against Whitmore was abandoned, leaving them 26 points adrift of Checkley. Whitmore, batting first posted 228-9, Raj Kumar top scoring with 73, but only 14.4 overs were possible in the second innings, with Porthill closing on 39-3.

Meakin moved back to the top of the table, picking up maximum points against Silverdale winning by 65 runs. After being put into bat Meakin were dismissed for 131, Karl High top scoring with 42, as Glynn Moore took 4-23. In reply Silverdale were blown away for just 66, Mathew Redican doing the damage on his way to collecting figures of 8-24. The victory moves Meakin 19 points clear of Little Stoke at the top.

Little Stoke lost their grip on the league, as only a draw was possible against fellow promotion hopefuls Moddershall. Batting first Moddershall, looked in trouble at 65-3, but Khalid Malik smashed 96 not out off 81 balls, being supported by Sam Moores (44no), pushing the score up to 207-3. In reply Little Stoke had huge problems, but only 29 overs were possible as they closed their innings on 39-7, in an innings which featured five ducks, as Matt Goodwin took 4-7. The draw means Little Stoke slip into the reach of the chasing pack just two points ahead of Cheadle and four above Moddershall, while falling 19 points adrift of Meakin.

Cheadle picked up the winning draw against Betley. Darren Plant hit a run a ball 94 not out, finding support in James Sellers who smashed 56 of 36 balls for Cheadle, as they declared on 216-6 after 45 overs. Sellers then took 3-46 as Betley closed their innings on 113-6 from 34 overs.

At the other end of the table, Alsager were comfortably beaten at home by eight wickets against Sandyford. In the first innings Alsager were blown away for just 68, Andrew Barnett taking 6-36 for Sandyford. It took the visitors just 12.4 overs to reach the target Sohail Rauf (21no) and Nick Atkinson (20no) seeing them over the line. The defeat leaves Alsager 21 points adrift of safety at the bottom, while Sandyford move 37 points clear of the relegation zone.

Meir Heath move off bottom spot giving their survival hopes new life, with 114 run victory at home against Ashcombe. Batting first Meir Heath got off to a poor start losing both openers for nought, but they recovered to post 165, Jake Heath top scoring with 54.  In the second innings Iftikhar Asghar (6-14) and Rich Brough (4-37) tore through the Ashcombe batting line up removing them for just 51. The victory moves Meir Heath just 11 points behind Barlaston and safety.

Blythe’s game against Barlaston was abandoned. Alex Heslop (114), Craig Grimley (66no) and Simon Owen (49no) put Blythe in a strong position at tea, enabling them to declare on 318-3 after 50 overs. In the second innings only 28 overs were possible, but Barlaston were struggling on 85-7, Blythe captain Peter Finch taking 6-19.

Newcastle & Hartshill leapfrogged Stafford, taking top spot, coming out victors at home by eight wickets. The visitors were asked to bat first and were dismissed for 154 in the 46th over, Gareth McAloon the pick of the bowlers with figures of 4-54. In reply Nasir Malik made light work of the run chase smashing 74 not out off 53 balls, supported by captain Simon Wood (35no) they saw their Newcastle side home in just the 22nd over. The win means Newcastle & Hartshill go eight points clear of Stafford and 24 points ahead of third place Norton.

Norton maintained their challenge at the top with a four wicket home victory against basement side Bagnall. After putting the visitors into bat, they reduced them to 158 all out, with Andrew Whitehurst taking 5-19. In response Norton only had opener Ahsan Tariq to come to terms with the Bagnall bowling line up, batting through the innings finishing 65 not out, guiding his side to victory. The defeat leaves Bagnall a long way from safety, 63 points adrift of Weston.

Kidsgrove sit in fourth after their game against Rode Park & Lawton was abandoned. Batting first Rode Park were dismissed for 223 in the last over of their innings, Kevin McClean top scoring with 84. In the second innings only 23 overs were completed as Kidsgrove closed their innings on 90-2. Kidsgrove are now 27 points behind second place Stafford in their push for promotion.

At the other end of the table Bignall End could only manage a losing draw against Leycett. Batting first Bignall End posted 225-5, Kim Barnett top scoring with 116 not out. In the second half it was Chanaka Wijesinghe turn to hit a century of his own finishing on 115 not out as Leycett closed their innings on 177-5 from 37 overs. The draw leaves Bignall End 47 points behind Weston who were beaten by Caverswall.

Defending 201 Caverswall dismissed Weston for 150 to win by 51 runs. Jeandre Luddick (47) and captain Robert King (43) made it into the forties for Caverswall, as they posted 201-9 from their allotted overs, Paul Hampshire took 4-41 for Weston. In reply Weston were removed in the 36th over, Nazakat Ali being the pick of the bowlers for Caverswall with figures of 6-38.

Oulton picked up a winning draw away at Endon. Batting first the visitors posted 240-7, Shawn Hunt (60) and Jono Whalley (59) the main run scorers. In response Endon were on 103-4, George Sellers unbeaten on 51 before the rain came with 30 overs completed.

League leaders Eccleshall dominated their game against Forsbrook but could only manage the winning draw at home. After being asked to bat the home side declared after 42 overs with the score on 264-7, Dominic Wright top scoring with a blistering 67 not out off 34 balls, while David Hibbert (55) and Myles Coughlan (52) also made half centuries. In the second innings Wright then took 4-36 as Forsbrook fell to 116-7 from 42 overs. The draw puts Eccleshall 14 points clear of Woore and 44 above Crewe.

Woore took full advantage of Eccleshall’s draw, picking up maximum points against bottom club Norton-In-Hales. Navid-Ul-Khurram Kaleem set the tone at the top of the order for Woore finishing on 100 not out as his side declared on 212-2 in the 43rd over. In the secon innings Woore shared the wickets around to reduce Norton-In-Hales to 150 all out in the 38th over, with Callum Claydon putting up some resistance with 60. Defeat leaves the strugglers 23 points below Leek & Moorlands and safety.

Crewe lost ground on the top two with a five wicket away defeat against Stone SP. Batting first the away side were dismissed 110, Aidan Schmid the pick of the bowlers with 4-26, as Simon Farmer and Adam Pursell both took three of their own. In reply in took Stone 35.5 overs to reach the target with Michael Perry top scoring with 52. Crewe slip 30 points behind second place Woore, as Stone start to gain some momentum.

At the other end of the table Leek & Moorlands gained the winning draw against fellow strugglers Church Eaton. Will Leeson hit his second 71 in as many weeks, while Matt Bowcock (53) and Neal Lafford (42), helped Leek declare on 266-7 from 54 overs; Jonathon Arnold took all the wickets for Church Eaton collected figures of 7-92. In the second innings Church Eaton closed their innings on 176-8 in the 38th over, Andy Greaves top scoring with 57. The draw leaves both sides with work to do, Leek 23 points above the drop and Church Eaton 29 points clear.

Wedgewood & Stanfields eased their worries slightly after they gained a winning draw of their own against Hanford. After dismissing Hanford for 183, Wedgewood closed their innings on perilously on 128-8 after 32 overs, as Zafar Iqbal took 5-58 for Hanford. The draws leaves Wedgewood 45 points clear of the relegation zone, while Hanford’s hopes of promotion have ended.

The game in mid table ended in a draw between Oakamoor and Fenton. Batting first Oakamoor were dismissed in the last over for 188, Tom Sherratt (49), Andy Shaw (42) and Matt Carnwell (40) all made it into the forties, as Stephen Atkinson bowled through the innings to take 7-84. In the second innings the rain beat Oakamoor as they were unable to take the final Fenton wicket, closing their innings on 131-9, from 27.4 overs.