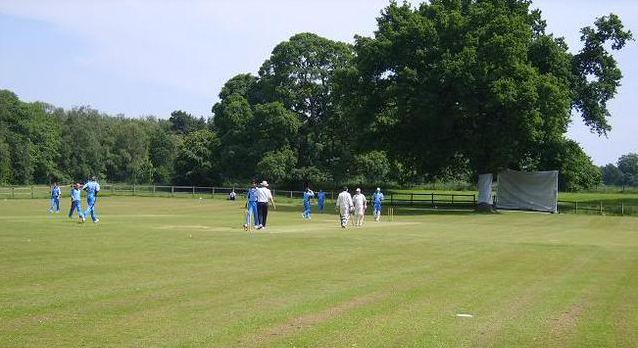 It’s how you were at the top of the table as Stone, Leek and Checkley all won. Stone remain top after comfortably beating Burslem by 104 runs. Luke Cheadle’s 133 not out enabled Stone to declare after 53 overs with the score on 234-2, finding support in Phillip Cheadle (69no). In the second innings Dries Nell collected figures of 4-19 as Burslem were finally dismissed for 130 in the 52nd over, falling from 101-5.

Leek stay three points adrift of Stone with a 81 run victory against strugglers Audley. After winning the toss and deciding to bat Leek posted 205-8, Nadeem Malik top scoring with 67 not out, moving the score from 108-5, while Thomas Oaks (4-40) and Andrew Johnson (3-76) taking the majority of the wickets. In reply only Dean Bedson got to grips with the Leek bowling attack with 65, as his side were removed for 124 in the 48th over; Malik taking 5-22 and Alex Thompson picking up 4-45. Leek now sit on 282 points, three behind Stone and 10 in front of Checkley, while Audley are 17 points off Burlsem and safety.

Checkley maintained their title push with a six wicket victory away at Porthill. After putting the home side into bat, Checkley went onto dismiss Porthill for 76, Andrew Cooper the pick of the bowlers with 7-42. In response Checkley fell to 37-4 but Daniel Spasic (32no) and Dan Knight (20no) saw their side over the line, moving them to 13 points behind Stone dashing Porthill’s hopes of silverware.

Longton kept their slim hopes of the title alive with a 63 run home victory against Whitmore. Longton opener Michael Longmore top scored in the first innings with 57, helping his side post 202-7, while Lee Johnson and Yasim Murtaza both took three wickets for the visitors. Whitmore then lost wickets at regular intervals as they were bowled out for 139, Murtaza hitting 42, as Chris Hampshire picked up figures of 4-13. Longton are now 23 points off top spot.

Knypersley are fifth with a seven wicket victory away at Hem Heath. Nayyar Abbas was the pick of the bowlers for the visitors, collecting 6-33 as Hem Heath were dismissed for 97. In the second innings Paul Goodwin (31no) and Abbas (18no) guided their side over the line recovering from 34-2.

At the bottom end of the table Wood Lane moved to relative safety beating basement side Elworth by one wicket. Batting first Elworth recovered from 58-7 to reach 155 before they were all out, as number 10 Russell Cope top scored with 48, while Steve Norcoup took figures of 5-44. In reply Wood Lane fell from 74-2 to 84-6 but Zain Shah guided his side to the target with 45 not out, to move them 26 points clear of Audley and the relegation zone, while Elworth are 47 points adrift of safety.

Meakin continued their charge towards the Premier Division with a comfortable 146 run victory against Cheadle. Ben Mcguire was the star of the show, smashing 153 not out off 79 balls in an innings which featured 13 fours and 12 sixes, enabling his side to declare on 282-8 in the 45th over, while James Sellers stuck to his task collecting figures of 6-66. In the second innings Cheadle were reduced to 136 all out, Andrew Coxon (57) top scoring, while Dave Edwards took out the lower and bottom order picking up figures of 5-28. Meakin sit 27 points clear of second place Little Stoke and 34 points ahead of third place Moddershall, Cheadle slip 35 points below Little Stoke.

Little Stoke lost ground on Meakin, beaten at home by 24 runs against strugglers Alsager. In the first innings Little Stoke restricted the visitors to 178, dismissing them in the 48th over, Sean Price top scoring with 46, while Peter Turnbull took 5-43. In reply Little Stoke fell from 101-4 to 154 all out, Paul Newnes (6-31) the pick of the bowlers. The defeat means Little Stoke fall 27 points behind Meakin but stay eight points clear of Moddershall, while Alsager’s much needed win moves them 20 points behind Barlaston and safety.

Moddershall also lost ground on Meakin, defeated by 64 runs against Betley. Moddershall’s Matt Goodwin put his side on the front foot with figures of 8-42 as Betley were reduced to 127 all out. In response Moddershall were blown away for 63, as Richard Bebbington collected figures of 4-12. The defeat puts Moddershall eight points behind Little Stoke, whereas the victory lifts Betley 33 points clear of Alsager.

At the bottom end of the table Meir Heath narrowly lost a low scoring game against Sliverdale by two runs. Silverdale batting first were all out for 73, Iftikhar Asghar doing the damage with 4-31, supported by Neil Crump (3-11). In the second innings Silverdale’s Mitchell Stokes rescued his side with figures of 7-31 removing Meir Heath for 71. Meir Heath are 33 points off Barlaston and safety.

Barlaston were unable to pull away from the bottom two, beaten at home by seven wickets against Sandyford. After being put into bat the home side were reduced to 154 all out, with only Ben Grange (56) and Bronson Meehan (48) getting to grips with the Sandyford bowling attack, in an innings which featured six ducks, as Craig Leese took 5-16. In reply Sohail Rauf (73no) was the backbone of the Sandyford batting line up, finding support in Jonathon Barnett (30no), passing the target in the 41st over.

In mid table Blythe beat Ashcombe by 58 runs at home. Blythe were removed for 157, Rizwan Haider (5-40) doing the damage for the visitors. However in reply Ashcombe were blown away for 99 in the 24th over, as Blythe shared the wickets around.

Stafford took a step closer to promotion with six wicket victory away at Leycett. The visitors won the toss and decided to bowl, which proved to be the right decision as Leycett were dismissed for 89, Oliver Stark taking 6-38. In response Stafford had starts throughout the batting line up and passed the target in the 29th over, to move 25 points clear at the top.

Newcastle & Hartshill lost ground on Stafford beaten by four wickets at home against Kidsgrove who gave their promotion hopes new life. The home side were put into bat and were reduced to 111 all out, lower order runs pushing the score up, recovering from 36-7, as Richie Jervis and Richard Hagan both took four wickets. Hagan then guided his side to victory with 49 not out, to move his Kidsgrove side within nine points of second place Newcastle & Hartshill and 34 points adrift of Stafford.

Norton couldn’t take advantage of Newcastle & Hartshill loss, beaten themselves by 22 runs against Endon. After being put into bat Endon’s  captain Alex Bailey top scored with 44, helping his side reach 215 before they were all out. In reply Norton had starts in the top order but nobody could go on and make a match winning knock as they fell for 193 in the 56th over, as Anthony Sheeran took 6-47 for Endon. Norton are now 20 points below the promotion places, while Endon secured safety.

The game between the bottom two teams ended in a Bignall End eight wicket victory, while Bagnall’s fate was secured. Batting first Bagnall fell to 20-6, but Aaron Brunt (59) and Nicholas Aitken (44) resurrected the innings to help them reach 131, before they were all out. In response Kim Barnett (70no) guided his side to victory with eight wickets in hand, putting his side 58 points below Leycett and safety.

Oulton collected a four wicket victory on their travels against Caverswall. The home side were put into bat and were dismissed for 111, Jeandre Ludick top scoring with 64, as Daniel Colclough took 5-43 for Oulton. In the second innings Rob Spruce hit 48 not out to guide his side to victory in the 35th over.

Weston picked up an 18 run victory at home against Rode Park & Lawton. Batting first the home side lost wickets at regular intervals, stuttering their way to 125 all out. In the second innings Martin Dawson did the damage with the ball taking 6-23 as Rode Park & Lawton were reduced to 107 all out.

Eccleshall have secured promotion back to division two, with seven wicket victory at home against third place Crewe. Paul Cox collected figures of 5-27 for Eccleshall as Crewe were removed for 142, with George Harding hitting 56. In reply Eccleshall captain Myles Coughlan struck 89 not out, dominating the innings, helping his side to victory, and promotion.

Woore also secured promotion with a 103 run victory against Fenton. Muhammad Arshad top scored for Woore with 60, to move his side from 81-5 to 168 all out. Mark Bengry then did the damage with the ball for Woore taking 7-47, as Fenton were blown away for 65. Woore closed the gap between themselves and Eccleshall after attaining maximum points, to seven. The two sides face each other in a game that could decide the title in two weeks time.

At the other end of the table, bottom side Norton-In-Hales beat Hanford by five wickets at home. Jack Warrington was the pick of the bowlers for the home side with 4-12 as Hanford were reduced to 82 all out. In reply Norton-In-Hales lost wickets in their run chase but passed the finish line in the 24th over, as they sit 25 points adrift of Leek & Moorlands and safety.

Leek & Moorlands picked up a valuable one wicket victory against Stone SP. Batting first Stone were restricted to 125-9 from their 55 overs, Adam Pursell top scoring with 51 not out, as Colin Dearden took 5-41. In response Leek only had Neal Lafford (58) and Will Leeson (27),  get to grips with the Stone attack as they had a late collapse, but stumbled over the line after 42 overs. The win puts Leek 25 points clear of the drop and 18 points behind Oakamoor who are their next opponents.

Oakamoor slipped into danger with a 22 run defeat at home against Church Eaton. After being put into bat Church Eaton were finally dismissed for 290 from 49 overs, Matt White (90) top scoring, with Matt Wolff being the pick off the bowlers with 4-58. In the second innings Oakamoor captain John Wood hit 75, finding support in Andy Booth (50) but they fell short after 61 overs. Defeat means Oakamoor are 43 points clear of the relegation zone, and 18 points above Leek, with the two teams below them still to play in the three remaining games.

Forsbrook beat Wedgwood at home by 110 runs. Deciding to bat first the home side reached 177 before they were bowled out in the 54th over. In the second innings Andrew Jones claimed figures of 7-15 for Forsbrook as Wedgwood were dismissed for 67.