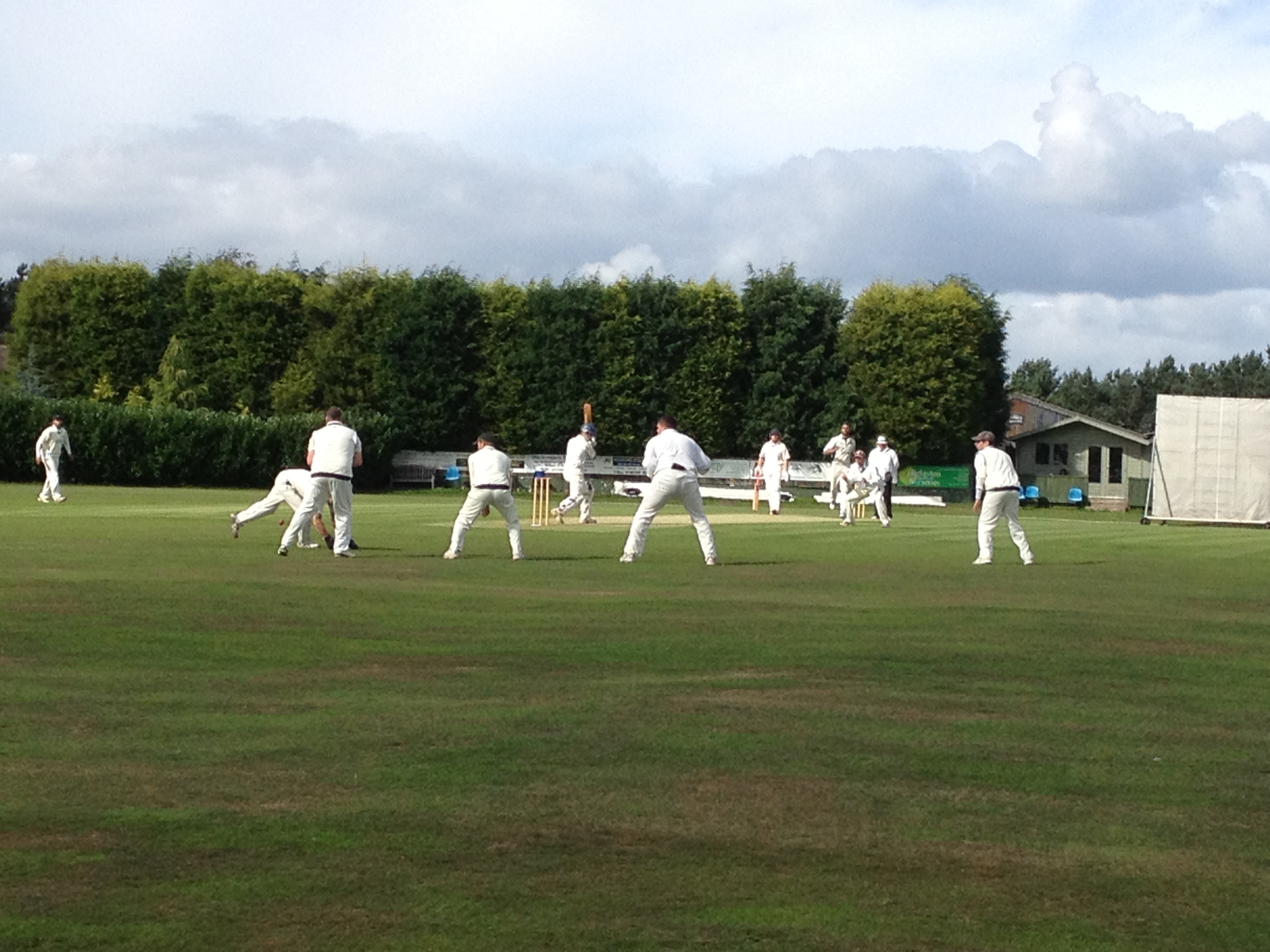 Leek move to the top of the table at the business end of the season, picking up maximum points against bottom side Elworth, winning by 72 runs. After deciding to bat, Leek had Chris Beech and Nadeem Malik fall one short of their half centuries, as they posted 217-8. In the second innings Paul Hammersley collected 5-29 as Elworth were dismissed for 145. The win moves Leek two points clear of Stone who beat Whitmore.

Stone dropped to second place despite beating Whitmore at home by one wicket. After the home side won the toss and decided to bowl first they were put on the back foot due to Tom Meredith (84), who found support in Raj Kumar (47) and Yasim Murtaza (43) as Whitmore recorded 245-6 from their 55 overs. In reply Stone looked in trouble at 171-7 but number eight George Hawbrook smashed 61 off 39 balls to put his side in touching distance of victory at 240-9, finally reaching the target in 55 overs. Stone fall to two points behind Leek, but 20 in front of third place Longton.

Dave Wheeldon gave his Longton side a slim hope of winning the title with an unbeaten century as they easily beat Hem Heath by 92 runs. After his side chose to bat first Wheeldon hit 105 not out, dominating the innings as his side finished on 209-6. In the second innings Eddie Jones (5-39) and Craig Barker (4-28) dismantled the Hem Heath batting line up to reduce them for 117. The win leaves Longton 22 points adrift of Leek.

Checkley’s inconsistent form continued as their title hope’s faded, beaten by Wood Lane by 26 runs. Jamie Jervis struck 115 while Ryan Hassett hit 71 to help their Wood Lane side set Checkley 240 to win. In reply Checkley got off to a dreadful start losing both openers for ducks, but Michael Allen (84) and Andy Carr (43) helped to rebuild the innings but they were eventually dismissed for 213, while Steve Norcup was the pick of the Wood Lane bowlers with figures of 5-62. Defeat leaves Checkley 27 points behind Leek, whereas Wood Lane moved 43 points clear of Audley and the drop.

Burslem won the crucial battle at the bottom against Audley, victorious by three wickets. Audley got off to a terrible start batting first falling to 1-2 which then became 76-5, eventually being bowled out for 135, Dean Bedson top scoring with 45, while Michael Brown took 5-60. In response Burslem made a solid start at 58-0 but then lost wickets at regular intervals to fall to 89-6, stumbling over the line in the 68th over, as Thomas Perkins took 6-35, to put Burslem 31 points clear of Audley and the last relegation spot.

Meakin’s march towards the premier league was halted, only managing a winning draw against Barlaston. Batting first Meakin were all out in the 52nd over for 274, Peter Wilshaw (79), Andrew Whitehead (62) and Ben Mcquire (51) all making half centuries for the table toppers. In reply Barlaston closed their innings on 211-8, Bronson Meehan top scoring with 60 not out. The draw leaves Meakin 21 points clear of Little Stoke at  the top and 24 above third place Moddershall.

Little Stoke closed the gap to Meakin with an eight wicket home victory against Blythe. The visitors batting first had several starts but nobody could go on and make a notable score as they were dismissed for 141 after 48 overs, while Naveed Arif took 5-37. In the second innings Peter Turnbull smashed 78 not out off 59 balls, as Little Stoke reached the total in the 28th over. The victory moves Little Stoke to within 21 points of Meakin and three points clear of Moddershall.

Moddershall closed the gap on the top two with a 71 run victory at home against Ashcombe. Tom Ball’s (101) century supported by Frasier Hawkins (50), Sam Moores (45) and Kashif Bhatti (44no) ensured Moddershall could declare after 53 overs on 280-4. In response Ashcombe were reduced to 209 all out, with Nick Goodwin hitting 82, while Bhatti claimed 7-45.

Silverdale still have slim hopes of promotion after a six wicket victory at home against Cheadle. The visitors batting first had Shaun Jenkinson (71) and James Sellers (52no) to make half centuries as they were all out for 177, with John Shenton taking 5-29 for Silverdale. The home side’s captain Mitchell Stokes (52no) saw his side over the line in the 35th over to put them 25 points behind second place Little Stoke.

At the bottom end of the table Meir Heath came out on top beating Alsager by 59 runs. Deciding to bat first Meir Heath closed their innings on 178-9, Richard Stonier top scoring with 50 as Paul Newnes claimed 5-50 for Alsager. In reply Alsager were dismissed for 119, Iftikhar Asghar being the pick of the bowlers for Meir Heath with 7-30. With the victory Meir Heath are now 18 points from Barlaston and safety, while Alsager are 24 points adrift.

Sandyford gained the winning draw against Betley. Having set Betley 209 to win, Sandyford were unable to find the last wicket they needed for victory. In the first innings Stephan Shemilt and Jonathon Barnett both hit 53 for Sandyford.

Top of the table Stafford saw their charge towards the title take a knock when they were beaten by six wickets away at Oulton. After being put into bat Stafford fought back from 63-6 to reach 173 before they were dismissed, as Daniel Colclough collected 6-41. In the second innings Tom Phillips (87no) and Rob Spruce (67) were the dominant forces for Oulton as they passed the target in the 45th over. The defeat means the gap at the top closes to 11 points with Newcastle & Hartshill beating Norton.

Second place Newcastle & Hartshill took full advantage of Stafford’s slip, travelling to Norton and coming away with a seven wicket victory. Having won the toss and put Norton into bat, the visitors reduced them to 100 all out, with Nasir Malik and Andrew Keates bowling through and taking four wickets each. In response James Hagan hit 50 not out to guide his side to victory in the 31st over. The visitors are now 11 points behind Stafford but are nine clear of third place Kidsgrove.

Kidsgrove kept the pressure on the top two with a comfortable 10 wicket win against Weston. Batting first Weston were restricted to just 126 before they were dismissed as Jamie Jervis claimed 5-41. Ryan Davis (69no) and Dave Leese (58no) then eased their side to victory without a wicket being lost, to keep the gap between themselves and Newcastle & Hartshill to nine points.

At the bottom Leycett secured their safety with a four wicket victory against Endon. Michael Barcroft and Richard White both took three wickets for Leycett as Endon were restricted to 212-9, Tom Latham (66) top scoring. Chanaka Wijesinghe (119no) then hit his fourth century of the season to take control of the innings and guide his side to victory.

Leycett’s win seals Bignall End’s fate and have been relegated, after they were beaten by eight wickets away at Rode Park & Lawton. Andrew Howle (47) top scored for the visitors as they posted 171-7. In reply Rode Park & Lawton had an opening stand of 118 with Paul Chadwick hitting 61 and Adam Donnelly finishing on 51. They finally reached the target after 42 overs for the loss of two wickets.

Basement side Bagnall’s season didn’t get any better, beaten by six wickets against Caverswall. After being put into bat Bagnall were blown away for 43 inside 17 overs, Mat Phillips taking 5-14. In reply Caverswall lost wickets but got over the line after seven overs, as Asif Ahmed Kahn took 4-23.

Eccleshall extended their lead at the top, taking maximum points away at Norton-In-Hales with a 128 run victory. The away side’s captain Myles Coughlan finished on 107 not out to enable his side to declare after 50 overs, posting 207-4. Cameron Sinclair was then the pick of the bowlers for Eccleshall taking 7-36 to dismiss Norton-In-Hales for 79.The win moves Eccleshall 12 points clear of second place Woore, while Norton-In-Hales are 47 points adrift of Leek & Moorlands and Oakamoor.

Woore maintained the pressure on Eccleshall with a seven wicket victory against Crewe. Mark Bengry took 7-64 as Crewe were removed for 116 inside 25 overs. In the second innings Woore smashed off the total in 24.3 overs, Navid-Ul-Khurram top scoring with 80. Next week will be crucial to where the division three title goes as the top two take each other on at Woore.

At the other end of the table Leek & Moorlands came out on top against Oakamoor winning by 50 runs, pulling away from Norton-in-Hales. Neal Lafford (50) top scored for Leek in the first innings, when they set Oakamoor 165 to win. In reply Oakamoor got off to a poor start and were reduced to 53-9 but a last wicket partnership of 61 moved the score onto 114 before they were dismissed, Colin Dearden claimed 5-45 for Leek; leaving the teams level on points, 47 points clear of Norton-In-Hales.

Wedgwood secured their safety with a 49 run victory against Fenton. Mitchell Edwards (127no) dominated the Wedgwood innings, enabling his side to declare on 215-3 after 50 overs. Ramzan Mohammed then took 6-52 to reduce Fenton to 166 all out, with Paul Farmer top scoring with 60.

Stone SP beat Hanford by three wickets. Muhammad Akhtar smashed 89 to push his Hanford side up to 202 when they were dismissed in the 50th over, while Stone shared the wickets around the bowling attack. In response Stone had Will Weston (68) and Jason Revill (62no) make half centuries, on their way to the total in the 59th over, while Zafar Iqbal took 5-80.

Forsbrook eased their way past Church Eaton, victorious by seven wickets. Batting first Church Eaton were dismissed for 81, Andrew Jones claimed 5-37. In the second innings Craig Walley ( 35no) Jones (22no) guided their side over the line.