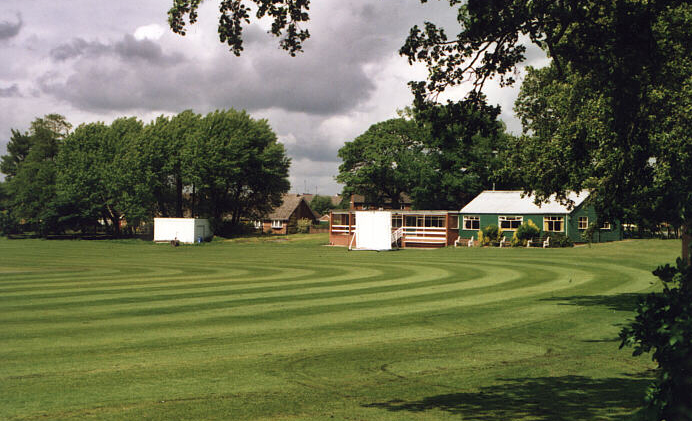 Leek took a step closer to securing their second title in successive years with a 55 run victory at home against Checkley. Having won the toss Leek elected to bat first and with Tim Tweats top scoring with 50, they posted 201-8 from their allotted overs.  In the second innings Checkley were dismissed for 146 as Leek shared the wickets around their attack, to move 14 points clear at the top with a trip to Knypersley next week.

Stone are Leek’s only threat remaining to the championship but they could only manage a winning draw against third place Longton. Batting first Stone reached 258-6, with James Dawson hitting 121 as Luke Cheadle (51) also passed the half century mark. In reply Longton closed their innings on 214-6, with Dave Wheeldon making 73, as their hopes of lifting the title vanished, while Dries Nell collected 5-92. Stone are now 14 points adrift of Leek and travel to relegated Audley in the last week of the season.

At the other end of the table Audley’s fate has been sealed with a 36 run defeat away at Whitmore. The visitors got off to a good start reducing Whitmore to 27-3, eventually dismissing them for 168, Andrew Johnson being the pick of the bowlers with 5-28, while Raj Kumar hit 69. In response Audley made a poor start with the bat themselves falling to 20-3, they couldn’t recover finally being bowled out for 132, Lee Johnson taking 5-60, leaving them 30 points behind Burslem and safety.

Burslem’s safety came with a losing draw against already relegated Elworth. Chasing 200 Burslem closed their innings on 151-8 with Michael Brown (48) and Joshua Pieters (47) helping their side recover from 32-5. In the first innings Chris Regan top scored with 56, while Yasir Ali also hit 53 for Elworth.

In the middle of the table Hem Heath beat Porthill by 51 runs. John Cheadle top scored for Hem Heath with 55 as they were reduced for 124 inside 47 overs, John Hancock being the pick of the bowlers taking 5-46. In reply Porthill slumped to 73 all out with only two batsmen making double figures, while Hem Heath shared the wickets around.

Wood Lane entertained Knypersley, winning by 73 runs. Ryan Hassett carried his bat to finish 96 not out for Wood Lane as they posted 186-9. In response Knypersley were dismissed for 113 with Samiullah Kahn collecting 5-40.

Meakin have secured their Premier Division status for next season with a 144 run victory away at Betley who have secured safety. Peter Wilshaw’s (100) century set Meakin on their way as they reached 239 before they were dismissed in after 45 overs, while Faisal Irfan Butt and Richard Bebbington both took four wickets for Betley. In the second innings Tom Blackwood hit 57 but that was as good as it got for Betley, being reduced to 95 all out inside 30 overs, while Andrew Whitehead took 5-27 for the visitors. The win puts Meakin 21 points clear of second place Little Stoke and 29 above Moddershall in third, with a home tie against Ashcombe left.

Little Stoke kept their hopes of promotion alive with a 47 run victory away at Meir Heath who have been relegated to division two. Peter Turnbull and Daniel Richardson both struck 69, putting their side in a position to declare on 198-8 from 54 overs. In the second innings Meir Heath were reduced to 151 all out, with Dale Heath top scoring with 52, while Turnbull collected figures of 6-40. The win leaves Little Stoke 21 points adrift of Meakin but eight points clear of third place Moddershall with a home game against Cheadle remaining.

Moddershall comfortably beat Blythe at home by 10 wickets. Having won the toss and deciding to bat Blythe were dismissed for 191, Matt Goodwin (5-48) and Kashif Bhatti (4-55) doing the damage. In the second innings Moddershall had no problems knocking off the total with Fraser Hawkins finishing on 107 not out and Sam Moores hitting 83 not out, passing the target without the loss of a wicket. Moddershall travel to Sandyford in the last round of the season, eight points adrift of second place Little Stoke.

At the bottom of the table Barlaston’s six wicket victory against Silverdale kept their division one status for next season. In the first innings, Adrian Whittaker (59) and Mitchell Stokes (50) both passed hit half centuries for Silverdale as their side was reduced to 178 all out, while Alex Thorley (4-70) and Mark Stanyer (4-20) both took four wickets. In reply Barlaston’s Jack Davies hit 97 to help his side reach the target in the 55th over for the loss of four wickets, to put them 30 points clear of Meir Heath.

In mid table Cheadle beat Alsager by eight wickets. Having decided to bat first Alsager were removed for 111, Steve Morgan (5-31) and James Sellers (4-42) doing the damage. In reply Andrew Coxon top scored with 41 not out as Cheadle chased down the total in 43rd over.

Sohail Rauf was the star of the show as his Sandyford side travelled to Ashcombe and came away with a four wicket victory. Rauf took four wickets in four balls to blow away the home side’s lower order, taking the score from 149-6 to 169 all out to finish with figures of 6-35. Rauf then top scored with 37, helping his side reach the target in the 39th over.

Stafford have been promoted with a comfortable nine wicket victory against Bagnall. Aparajit Singh Khurana (5-25) and Oliver Stark (4-28) did the damage for Stafford as Bagnall slumped to 53 all out. In response Greg Massingham top scored with 38 not out for Stafford as they reached the total in the tenth over. Stafford stay 11 points clear at the top with an away fixture against Rode Park & Lawton left.

Newcastle & Hartshill kept the pressure on Stafford with one wicket victory against Endon. Batting first Endon recovered from 21-3 to reach 175 before they were dismissed in the 55th over, with Jordan Weaver (65) top scoring, while Nasir Malik took 5-64. In reply Newcastle & Hartshill looked to be struggling at 168-9, but Jonathon Gidman (33no) and number 11 Gareth McAloon (9no) guided their side over the line, to remain 11 points adrift of Stafford but 22 points clear of Kidsgrove going into their last game away at Leycett.

Kidsgrove’s hopes of promotion took a huge blow, when they were beaten at relegated Bignall End by three wickets. Having won the toss and deciding to bat first Kidsgrove were dismissed for 151, Rob Hagan top scoring with 55, as Bignall End shared the wickets around. The home side had starts throughout the innings as they passed the target in 69th over.

Leycett travelled to Oulton and came away with a two wicket victory. Simon Baker (67no) top scored for Oulton enabling them to declare on 234-7 after 53 overs, but Leycett passed the total after 60 overs with Robert Heath hitting 85, while Tom Spruce collected 6-66.

Weston eased to a nine wicket victory at home against Norton. Philip Stockton (5-29) and Martin Dawson (5-23) dismantled the Norton batting line to blow them away for 54. In the second innings Weston passed the winning line in the eighth over, with Dawson top scoring with 36 not out.

Caverswall gained the winning draw at home against Rode Park. Rob King top scored with 94, helping his side post 256-9 from their allotted overs. In response Rode Park closed their innings on 131-8, Adam Donnelly hitting 48, while Nazakat Ali and Jeandre Ludick both took three wickets.

Eccleshall remain top of the league despite being on the end of a losing draw against second place Woore. Woore won the toss sitting 12 points adrift of Eccleshall and, after asking their rivals to bat, restricted them to 201-7, Robert Lakin top scoring with 63, while Darren Snape collected 5-58. In reply Woore closed their innings on 198-9 from 51 overs, Muhammad Arshad hitting 61. The result leaves Eccleshall eight points clear of Woore as they take on Stone SP next week, while Woore travel to Wedgewood.

At the other end Norton-In-Hales have been relegated with seven wicket defeat away at Stone SP. Having been put into bat the visitors were dismissed for 215 in the 45th with Kyle Morgan hitting 108, while Adam Pursell took 5-77. In response Stone chased down the total in the 57th over, Shafique Hussain (101) and Pursell (74no) were the main run scorers. The defeat leaves Norton-In-Hales 47 points adrift of Leek & Moorlands.

Leek & Moorlands have secured a place in division three despite being beaten by 28 runs at home against Forsbrook. Adam Palmer was the dominant player in the Forsbrook batting line up finishing 98 not out to help his side post 174-6. In reply Leek& Moorlands were dismissed for 146 as Matthew Rogerson was the pick of the bowlers for Forsbrook with figures of 5-51.

Oakamoor captain John Wood guided his side to safety with an unbeaten century, as his side beat Hanford by two wickets. Having won the toss and deciding to bowl first Oakamoor removed the visitors for 201, Matt Wolff collecting 6-54, while Chris Mellor hit 51. In response Wood came to the crease with his side 0-1 and hit the winning runs to bring up his century, with two wickets remaining, while Zafar Iqbal recorded figures of 7-70.

Wedgewood travelled to Crewe and came away with a three wicket victory. Having reduced Crewe to 162 all out, Wedgewood’s Ramzan Mohammed followed up his four wicket haul with an unbeaten 78 to see his side over the line after 43 overs, as they recovered from 41-4.

Fenton beat Church Eaton by 35 runs at home. Stephen Atkinson top scored for Fenton with 42 helping his side post 181-6. Ashley Kent (6-34) then took out the visitor’s top order as they were dismissed for 146.